How will we know downtown Waco has “arrived?”

There are so many notions of what “good” means in relation to downtown. Some folks remember a time when the sidewalks were crowded and most of what a family needed could be – and was – purchased there. Young folks picture a place filled with hip spaces, where they and their friends would be delighted by high-end trends and nightlife. Plenty of us see small shops and restaurants beginning to multiply and Cross-fit enthusiasts running by in groups and feel pretty good about where we are right now.

I do think, though, that there is a real aspiration toward the next level – and I’d like to try to describe what that might be and look like, and what we’re all doing to help get there.

I think of the Downtown Development Corporation’s job as nurturing districts. There are several in Greater Downtown, and I love them all for different reasons, and we aspire to support and nurture all of them. But today I want to talk about the Central district, the one that’s mainly Austin Avenue with parts of Franklin and Washington. It’s the furthest along, but it’s not quite to the level when I think we will have “arrived” as a district.

Think of Lula Jane’s. It’s a destination business. Folks go there from all over the place. But could you name the five businesses closest to it? There’s a powerful sense of place on Elm Avenue, but there is not yet a business district that creates foot traffic from one business to another.  Now think of the 600 – 700 blocks of Austin Avenue, beginning with Sergio’s and Jake’s and ending with the Palladium and the Hippodrome. You could probably name several businesses in those two blocks, and at least once or twice (if you’re like me, that is) you’ve been to eat at Jake’s and been lured into Melange by their sidewalk sale, or walked by on your way somewhere else and seen friends going into Klassy Glass. There’s beginning to be enough interesting stuff going on within a small enough space that it spills over. 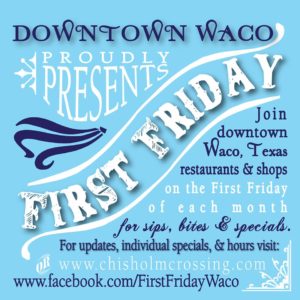 The best time, however, is often on First Friday evenings, when many businesses have special events and promotions and stay open later. This is definitely a time when the Central district can truly be its own destination for many folks – when there is enough going on for a group of friends can plan to meet at one spot to park, then figure it out from there – maybe a little shopping, dinner, music – and have confidence that they’ll have fun without a plan.

Next steps for Central district? Franklin Place, Hippodrome, Stratton and Stratton Square are all in the pipeline within a 2-block radius offering a combination of entertainment, food, and other attractions including over 100 new residences and upwards of 200 residents. In the same 2-block radius Muddle – a new watering hole and live-music venue – and thInc Space – an entrepreneurship and innovation hub where creative types work and generate cross-pollination of ideas – are new to the area and adding more ingredients and flavors to this spicy local brew.

Local developers are making these great projects happen. The Greater Waco Chamber is driving thInc Space. The Downtown Development Corporation is facilitating the Stratton development. The TIF and PID (more on them later) are supporting all of this with strategic investments in the built environment and in enhanced services and public events.

What can you do? COME ON DOWN TO DOWNTOWN. Especially on First Fridays, but every time’s important. Spend some time and money. Watch how they make coffee at Dichotomy, shop for ties at Suit City – go somewhere you’ve never been before, and think to yourself…”I just like to head downtown, and figure it out from there.”