When I think about it, I never had strong aspirations of living the American Dream. The ideals of Life, Liberty, and the Pursuit of Happiness were simply words that I, like many other people born in the United States, always took for granted. It was not until those “rights” were stripped away that I even noticed that I ever had them, and that I was privileged – privileged not because of anything I have done, but because of where I was born and the color of my skin.

There are those among us who do not take the American Dream for granted. Those who were not born into privilege, or those who were born, let’s say, in Mexico. There are people who are born and live their lives in countries and situations in which they constantly face great difficulty and lack of any opportunity. Some of these people sacrifice everything to travel to the United States which, in theory, is a land of opportunity. I say sacrifice because no matter how difficult one’s circumstances, it is always a sacrifice to leave your home, your family, your culture, your language to go to a place where no one knows you, no one likes you, and no one speaks your language – simply so you can put food on the table. It is truly desperation that drives people to emigrate from their homeland to seek out new possibilities.

This is my wife’s story, and now my story as well. My wife was born in Mexico. Like any other little girl she grew up going to school, playing (and fighting) with her sisters, and putting dresses on dolls. She wanted to be a teacher when she grew up. She had a blackboard which she used to teach her make-believe students. Then one day, shortly after the implementation of NAFTA, her dad lost his job. For several months, the family coped with his unemployment with the little money he earned from selling lotions on the street. But this was no way to support a family of five. Eventually, my wife’s father made the courageous, but difficult decision to move to the United States for work. They had applied for a visa several months earlier, but the wait was more than 20 years – so he came anyway, without a visa. After a year of separation, my wife’s parents made the most difficult decision of their lives. Her mom packed up the family (I say packed because it is a common expression – they actually came with nothing), said goodbye to friends and loved ones, and made the long, dangerous journey to the United States. They hired a man to take my wife, her mother and two sisters across the river, and deliver them to their new home in Waco, Texas. This man could have abused them, robbed them, or abandoned them, which happens to so many families – my wife was fortunate. And so began their glorious life of living in the shadows in the land of opportunity.

Living in the United States was not easy. My wife was ridiculed because she couldn’t speak English. She was told that she always had to lie, always had to hide her true situation. Needless to say, the life of an undocumented teenager trying to stay under the radar is a lonely and isolated life. But the family was together, and they had food to eat. My wife grew up in the Waco school system. She eventually learned to speak English, perfectly. In order to survive she had to work. In order to work, she had to claim that she had work authorization. She eventually went to college, earned an associate’s degree, and began attending church. This is where I come in.

My wife and I met in the spring of 2006 through a small group in our church. We fell in love, and were married in May 2007. Like many other naïve Americans, I was under the impression that if an immigrant, like my wife, married a U.S. citizen, like myself, then she could automatically become a U.S. citizen too. How wrong I was. The problem is that our immigration system is antiquated, broken, and incredibly complex. To make a long story short, my wife was eventually able to become a Legal Permanent Resident. Although, it was an arduous journey which forced us to endure 3 months of separation while she was sent back to Mexico as part of this process. Because of my wife’s status, she can now work legally, have a driver’s license and a mortgage; our lives are fairly normal.

The problem came when we applied for my wife to become a U.S. citizen. We have now been told that because of a box my wife checked on a form when she was working without authorization she cannot become a U.S. citizen, and will eventually be deported. There is no option; she will never qualify for any type of immigration benefit in the United States without a change in the law. Let me be clear about the brokenness of our immigration system: if my wife had robbed a bank, there might be a path for her. If she had murdered someone, there is a way for her to still become a U.S. citizen. But because she did what she had to do, and went to work to put food on the table for her family, in the only land she calls home, where she was raised from childhood, she will never be able to become a U.S. citizen. Our family now faces eventual exile. When we have children, they will be U.S. citizens, but their mother still will face deportation. Despite being a U.S. citizen, I am not free. I cannot live the American Dream. It is difficult to describe, but try to imagine if you can. Though we try our best to live normal lives, the fear and threat of separation and deportation constantly hangs over our heads.

Just for the record, I am unconditionally committed to my wife, and I have absolutely no regrets about loving and spending my life with this woman. That being said, when she is deported I will be deported as well. That means no more holidays with family. We may lose our house, our jobs, and everything we hold dear, except each other. Unfortunately, our story is not unique. Today in the United States thousands, if not millions, of U.S. citizens and their immigrant families are dealing with our broken immigration laws. Wives are being taken from their husbands and parents from their children due to deportation. Our immigration system is broken and it needs to change.

My challenge to you: When you think about immigrants, think about my wife and our story. Think about how this problem is affecting our community. We are your neighbors, your coworkers; we worship beside you in church. Waco, Texas is our home. Also, think about why it is that you may be deserving of the privilege of U.S. citizenship and others may not. What did you do to earn your citizenship? My wife has done everything to earn hers – I have done nothing. Finally, contact your representatives in congress: U.S. Representative Bill Flores – (254) 732-0748; Senator Ted Cruz – (512) 916-5834; Senator John Cornyn – 512-469-6034. Tell them to fix our broken immigration system, to stop separating families, and to allow people like my wife to become U.S. citizens so they can stay in the only land they call home.

To keep up to date with immigration advocacy work in Waco, join our page on Facebook: Waco Immigration Alliance. 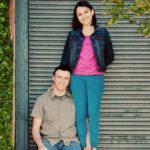 This Act Locally Waco blog post was written by Nick Haynes. Nick moved to Waco, Texas to attend Baylor University in the year 2000 where he earned a Bachelor’s degree in International Studies, and eventually earned a Master’s degree in Social Work. Nick has worked as a Social Worker in Waco for the past 5 years. Nick recently ran for U.S. Representative here in Waco to fight for immigration reform and for others in need of change. He now works at Baylor University. Eloisa immigrated to the United States from Mexico and has lived in Waco for 20 years. Eloisa eventually went on to earn her Bachelor’s degree in Business, and is now working on a Master’s degree at Baylor University. Eloisa also works full-time at Baylor. Nick and his wife, Eloisa, have been married for 8 years. They do not yet have children, but they have a 5 pound Yorkie named Poptart. Nick and Eloisa both attend Antioch Community Church.