Miscommunication leads to complication-
There come many paths
But you must choose one
and if you don’t choose then the rain soon come
See you might win some but you just lost one. –Ms. Lauryn Hill

I wouldn’t know where to start to make people understand these issues. They are so broad, so old, and yet so new and personal. The story of who I am, not just personally, but globally and throughout all time is not one I could tell in just one sitting.

To be mis-educated is to be done a disservice.

It is not the fault of the student, but it can wreak unknown and often unwanted havoc in a pupil’s life. Just as we receive an education in our learning institutes, we are also daily educated by our environment; our entire being is a result of our environment.

Personally, I was born in the projects of North Philly. When people talk about the ghetto they are speaking of me and the people I grew up with. I mostly went to Muslim school in accordance with my parents’ religion. Both in school and at home I was learning about what it means to be black and what it means to be African. I was taught about the African holocaust; African luminaries and scholars; black writers, artists, and musicians. But, it wasn’t until I went to public school that I had an idea of what it meant to be an American.

I remember sitting in history class, looking at the teacher as if he had sprouted an extra head.

It wasn’t just the shift in content, tone and perspective had also completely shifted. People I knew as heroes were now the bad guys; villains were lauded.

I remember once raising my hand and making a clarifying point about first wave immigrants from Europe and their interactions with the native population. I was immediately placated. It struck me then that perhaps not only was this new education different, but it might also be unwelcome to challenge or change. In this same vein I was learning about Greece and the government systems and their scholars, but not the Egyptians from whom they studied. I was learning about the equality of man and the greatness of our founding fathers, but not the perseverance of my forefathers who also helped to found this country.

Needless to say this new Euroccentric paradigm was completely alien to me. I became painfully aware of the lack of knowledge of African art, history, culture and tradition. I couldn’t find a shred of this information in the students, and not just white students, but also the people who looked like me.

Now, I attempt to combat this miseducation anywhere that I see it. Not because I’m more educated than anyone, but because I am just as miseducated as anyone, and only by talking it through can we see where our paths differ and which is right if any.

It can be frustrating at times. If you feel like you are already in the middle of the book, it is frustrating to have to turn back a few pages to catch people up. But if we are to ever understand each other as a species regardless of race, creed, color, religion or orientation it starts with communication and actively combating our American Mis-education. 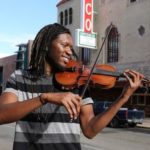