It’s almost 2016 and it’s about that time of year where everyone starts to think of some New Year’s resolutions. I personally don’t make any because I usually don’t end up sticking to them, but this time it’s different. These are really my own personal New Year’s resolutions for college but some of them (or all of them) can apply to other students in college.

The struggle has been real this semester. I moved into an apartment and took tougher classes. The fact that I was in an apartment meant that I didn’t have the luxury of being on campus. That resulted in me, more often than I should have, skipping class because I didn’t want to drive or take the bus to campus. My grades also went down a bit because of the tougher classes I took. So I decided that I would create several New Year’s resolutions that I would, hopefully, stick too for my 2016 spring and fall semesters.

This semester I learned just how hard going to 8 am classes can be. I am not a morning person and waking up at 7 to get ready for my 8 am classes was harder than I thought it would be. I took one my first semester, but I was living on campus so that made it easier to go to class. However, this semester I was in an apartment that was 15 minutes away from campus. Because of that, I would often choose to sleep in (which resulted in my grades going down). Unless you have to or you’re a morning person, I would avoid taking 8 am classes.

It doesn’t have to be a lot at once, but it would help to have a little savings in case of any emergencies. Maybe put in $10 or $20 a week. It doesn’t sound like much but eventually it’ll add up. This will come in handy whenever something comes up. My car broke down earlier this year and I had no money saved up that I could use to pay for it. I ended up borrowing money from my mom, which I later paid back. Let’s face it, we’re always going to run into something unexpected. Having some money saved up will be a huge help.

I definitely need to do this. I gained weight my first three semesters and really am not as fit as when I was in high school. I worked out for a bit my second semester but then stopped. I play soccer every now and then but that isn’t enough to get back in shape. So next semester I’m going to try to work out more. Working out can also be a good stress reliever for college students. Lifting weights or going for a run can help free your mind from any worries. Eating healthier can also make you more productive throughout the day.

Step out of your comfort zone

Yes I know, everyone says this, but it’s true! We all need to do this. I never really did that my first three semesters and I need to change that. For others, this can mean attending events on campus, joining new organizations, or just introducing yourself to others on campus or in class. For me, it’s going to the gym to work out more. Like I said before, this is something I need to do. The more I do it, the quicker I become comfortable going.

This will be the most difficult New Year’s resolution for me. I love to push things off until the last minute. Instead of writing that essay that’s due in a few days, I would just take a nap. This is a really bad habit of mine and I’m sure it’s the same for other college students. We all procrastinate, but we can also control it. Now I’m not saying to finish your work the day it’s assigned. Start out small, plan to finish your assignment a week or a couple days before it’s due to allow some time to look over it and make sure you can turn in your best work. It’s okay to procrastinate a little every now and then, but I need to try to keep it to a minimum.

I’ll be honest, I hate New Year’s resolutions. I never stick to them and I think they’re a waste of time. But this time, I figured that I would give it another try. I think the reason why most people don’t stick to their resolutions (myself included) is because we all make these unrealistic goals for ourselves that we usually give up on a week into the New Year. I think that these resolutions that I made are realistic enough for a guy like me to achieve, and hopefully for others to achieve as well. No matter what your New Year’s resolutions are, hopefully you’ll stick to them throughout the year! Merry Christmas and Happy New Year! 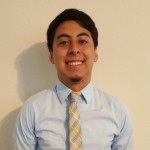 Diego Loredo is a sophomore at the University of North Texas. He is majoring in public relations. He graduated from University High School in 2014. Although he is still not quite sure what exactly he wants to do, he thinks he wants to work somewhere in sports PR (preferably soccer or college football). His hobbies include playing soccer and golf. He is 19 years old.