There is a conversation to be had here. One that requires honesty and vulnerability.

I don’t talk seriously about race much because our culture is burned out on it. Somehow we’ve departed from “I have a dream” to “I don’t wanna’ hear it”. So I’m judicious in my discussions of race. I use it sparingly so that when I do, it will count. Now I feel compelled to.

I grew up in a time & place where it was not socially acceptable to be black. If you wanted to see a movie with a black actor, you drove 45 minutes away to the St. Vincent Mall b/c that was the “Black” mall. Pierre Bossier Mall was the “White” mall & only played “white” movies.

Teachers spoke down to me. Students used the N word in front of other students & teachers with impunity. One sweltering Louisiana summer day, I waited outside a friend’s house, drinking from a hose while all my other friends took turns using the bathroom and getting water inside because my friend’s daddy didn’t want N*****s sitting on his toilet. When I was about eight, I recall running out of a restaurant screaming I didn’t want to be Black because my little heart couldn’t take it anymore. It was hell.

Regardless, I was a military brat, so as we moved I learned to adapt. Evolve. Adjust. Blend in. By the time I went to college in the North, I thought racism wouldn’t follow me.

I discovered I was wrong every time I drove through Idaho. One night, Rick Steadman, and others were with me as we left a carnival and I was “asked” to step out of a car by four officers at gun point because I fit the vague description of an escaped convict: black. No lie. I thought I was going to die that night. We all drove home silent. In tears.

Now I am married to a beautiful, white woman. We have beautiful children. When we married, I had to turn my back on my family that didn’t support our interracial marriage because I clung to the hem of my belief in God’s sovereignty more than the opinions of man.

We teach our children the values of truth, righteousness, and justice in a fallen world. One day we will teach them not to frequent certain places at certain times of night. Likewise, we’ll teach them how to interact with law enforcement officers during a traffic stop. That’s our reality.

Even still, what happened in our nation this week was a travesty. We began with a glimmer of hope that we could begin talking about race intelligently. That hope was lost when anger and ignorance took down our protectors.

Anger. Fear. Division. We scoffed in the ’90’s when black artists & leaders warned that the portrayal of African-Americans as “thugs” or “silly” in entertainment media was dangerous. Yet, the Bible tells us that faith comes by hearing. The seeds of division have been planted and matured to fruition. Now we are reaping a harvest grown from the casual glorification of thug culture and the honest fear of onlookers who think that’s really who we are.

Now, it seems that we’re all separated across a racial chasm as deep as our nation’s sordid history on race relations. Reading the Facebook posts of so many, It would seem as though I have to pick a side: “Are you for Police Officers or Black People?” It’s that simple. Just like that, racism is En Vogue again.

The pendulum has swung back to the place where those ignorant brats I grew up with have become community leaders, and have an excuse to openly use the N word with impunity again. I’m afraid of where we are as a nation.

There is a conversation to be had here. One that requires honesty and vulnerability. It means shutting up and TRYING to hear what the other person is trying to say. People are hurting. LISTEN!

We don’t have to be exclusively, blindly, pro-law enforcement or pro-minority to regain our conscience, our moral compass, or our identity as a nation. I refuse to participate in this debate between whose life does and doesn’t matter which is fueled by our outrage, ignorance, biases, and prejudices.

Treat people the way you want to be treated. If you call yourself a Christian, read your Bible. See what God has to say about the poor, the widow, the orphan, and the oppressed. Ask how what’s actually coming out of the politician’s mouth squares with what the Bible says about those topics. Don’t rush to judgment until you have all the facts. These are the basics. No one should have to remind us of these fundamental lessons in humanity. Even still, lest we forget:

“We hold these truths to be self-evident, that all men are created equal, that they are endowed by their Creator with certain unalienable Rights, that among these are Life, Liberty and the pursuit of Happiness…” 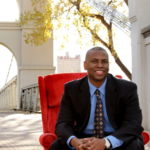 Robert Callahan is a name partner in the firm of Callahan & King, based in Waco, Texas. He is a graduate of Baylor Law School, who previously served in the McLennan County District Attorney’s Office under John Segrest. As a prosecutor, Robert was an advocate for women and children. In 2016, he was inducted into the National Black Lawyers Top 100 membership. Robert and his wife, Mollie, have been married more than ten years and have three children. They are actively involved in Antioch Community Church where Robert provides voluntary legal support and training for Unbound, a ministry that supports victims of Human Trafficking.