It’s the end of the year and I’m sad…

I headed into the last month of 2016 feeling more melancholy and tired than usual. I can point to three rocks in particular that have been heavy to me this year.

Racial tensions – Back in May we as a community paused to reflect on the anniversary of the illegal lynching and burning of a 17-year old black man named Jesse Washington, an event often referred to as “The Waco Horror.”  Looking back on that service, it feels like a grim symmetry that the 100th anniversary year of that terrible event would also be a year fraught with race-related tension, controversy and bloody violence.  In a strange way it is embarrassing for me to even mention how exhausting this tension has been for me this year.  I can see in the faces and hear in the words of my Black friends and neighbors that the weight I felt this year is a weight they have already been carrying for a very long time.  I know it will never weigh as heavily on me as it does on them.

Sexual assault and response at Baylor – I am a Baylor alum and I have worked there for almost twenty years, plus I am a human being and a woman.  Everything about this situation has been sad and bad to me:  the awful nature of the crimes themselves and the toll on the victims; the feeling of unfairness that comes with knowing that just because I am a woman I am more vulnerable to this kind of violence myself; the swirling currents and undercurrents of pain, blame, fear, sexism, and even racism in the general discussion of the events and the response; the personal concern for people whose reputations have been fairly or unfairly damaged;  the angry feeling that we are being relentlessly pecked at by buzzards who won’t let the story go; the gnawing guilt that comes with “just wanting it to go away” even though I know it is far too important an issue to sweep under the rug.   It has worn me out.

The presidential election –  Yes, my candidate lost.  But that is not why this election weighs heavily on me, at least it’s not the whole reason. More than any election I can ever remember, this one felt like a year-long slog through muck and disappointment.  There is a certain beauty in watching two fine teams battle it out in any sport, including politics. When your team loses you walk away from the game feeling disappointed with the outcome, but generally good about the worthiness of the game itself.  That’s how a presidential election should feel.  That is not how this one felt.

I don’t want to descend into whining. (“Too late!” I can hear some of you saying.)  But, I will also say that I am not particularly ashamed of my sadness.  I think I am justified in feeling sad about the things I have described above.  Frankly, I would wonder about myself if I didn’t feel sad.  To some extent, sadness is good for you…for me…for us as a society.  How might we treat each other if there were no such thing as sadness?  Still, in a world that thrives on a constant feed of instant gratification, we don’t seem to have much appreciation or patience for sadness any more.  I think we need to reclaim it.

The kind of sadness I am feeling now is a kind of confusion.  It’s a feeling of being in limbo.  It’s like I don’t understand how the world works anymore. It is unsettling – I was settled into one way of thinking and being, and evidence has come along that has unsettled me.   I was settled into thinking that racial tensions had mostly gotten better, that bad things don’t happen in places full of good people (like Baylor), that there are certain unspoken rules of civil engagement that we all generally share.  Now I am unsettled.  Being unsettled and confused, I have slowed down to try to figure out what to do next. It may take me a while.

In an odd way, it can be a time to relax, to give myself permission to go for a long walk, to clean out a drawer, to make something with my hands.  It can be a time for still and quiet.

Sometimes we think that just because a lot of something is bad, we can’t stand even a little.  But that is a mistake.  Too much salt in the soup ruins it, but a little makes it better.  I don’t want my whole life to be spent in confusion and limbo and melancholy, but I am not afraid of some.

I may not have intentionally invited sadness to my holiday celebrations, but since it’s here, I’m not working too hard to kick it out. Maybe it has a secret to tell me that I will need in the New Year. 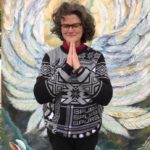