April is Earth Month!  To help us get in the spirit of sustainability, Anna Dunbar, Recycling and Public Outreach Administrator for the City of Waco Solid Waste Services, shares some tips, expertise and hopes for our community in a series of four blog posts.  For all the posts so far, click here.  Thanks for writing, Anna! – ABT)

In 1962 a marine biologist named Rachel Carson wrote a book called Silent Spring. The title referred to a world without birds due to toxic pesticides then commonly used in America (primarily DDT). I first read the book in college in the mid late 70’s. It was a time of great change – by 1972, a phase-out of DDT use in the United States had begun and the United States Environmental Protection Agency (EPA) was in its infancy.

Senator Gaylord Nelson from Wisconsin, a longtime conservationist, was the one who decided to have an environmental celebration in the spring of 1970. After his announcement, the energy started spreading across the US (without social media!) and ten thousand grade schools and high schools, two thousand colleges, and one thousand communities were involved in that thing that became “Earth Day.”

Over the decades, the spirit of Earth Day has risen, fallen, and risen again. There was an effort to raise public awareness about falling whale populations and dangerous nuclear power. In the US, we began to separate our household trash from recyclables in the 1990’s and early 2000’s.  Many companies like Coca Cola, M&M Mars, and Allergan in Waco have adopted zero waste or waste reduction goal and green business practices. Schools and churches have jumped in with efforts to send less waste to the landfill.

Earth Day this year is April 22. Today, Earth Day around the US is about learning experiences and activities  to make the natural world around us better.  Some cities have clean-up events, nature hikes, environmental awareness celebrations and even entertainment.

Here is what you can do to celebrate Earth Day in Waco :

April 20 – Mayborn Museum Science Thursdays – Smoke, Smog and City Life presentation by Dr. Rebecca Sheesley of the Environmental Science Department at Baylor University. The presentation is on Thursday, April 20 from 7 PM until 8 PM at the Mayborn Museum Complex, 1300 S. University Parks Drive; Coffee and cookies at 6:30 p.m.at the museum.  Everyone is invited and admission is free; does not include admission to the museum.

April 22 – National Jr. Ranger Day at the Waco Mammoth National Monument  – There will be fun activities with Park Rangers at this awesome park.  Come learn about Waco summer camps, recycling, litter prevention, and more. Children 12 and under tour for free this day only.

April 23 – Cameron Park Zoo “Join the Pride”  – This is an event hosted by the Mayor’s Committee for people with disabilities celebrating differences. There will be Keeper talks and a resource fair.

April 29 – National Prescription Drug Take-Back Day  – On Saturday, April 29, take this great opportunity to get rid of unwanted and expired drugs in a safe and secure manner. 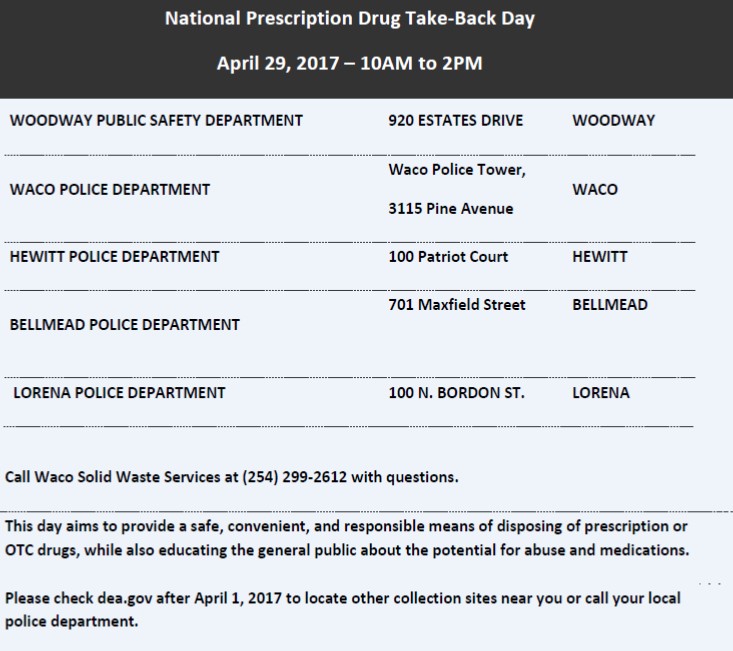 If you cannot attend an Earth Day event in Waco, never fear! Remember, you can make every day Earth Day! 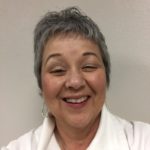 This week’s Act Locally Waco blog post is by Anna Dunbar. Anna is the Operations Administrator for the City of Waco Public Works. She is responsible for informing Waco residents and businesses about recycling and waste reduction opportunities as well as solid waste services in Waco. Her husband is a Baylor professor and her daughter is a graduate student at Baylor University. She is president of the board of Keep Waco Beautiful and is a member of The Central Texas Audubon Society and Northwest Waco Rotary. If you would be interested in writing for the Act Locally Waco blog, please email [email protected] .