Several years ago my friend Marianne Stambaugh and I were enjoying the Baylor Homecoming parade when the string of snazzy convertibles carrying the “Outstanding Young Alumni” rolled past.  When Marianne and I are together almost everything is funny to us, and this struck us as particularly hilarious. We immediately decided that we would start a group called “Mediocre Middle-Aged Alumni.”   Our plan was to insert ourselves in the parade directly behind the Outstanding Young Alumni. We would ride in a caravan of old pick-up trucks, a happy multitude of grey-headed men and women, comfortable in our stretchy pants and matching green and gold “MMAA” T-shirts, sharing some nice snacks, and waving contentedly at the homecoming crowd.

I’m not knocking outstanding people at all.  Lord knows we need them. We need some people who poke their heads up above the crowd and see new sights and dream new dreams. We need the people who use their energy, smarts, originality, creativity, hard-headedness or whatever it takes to accomplish things that impress the rest of us.  Outstanding people deserve to be celebrated.  They are inspiring!

I’ll admit though, that sometimes when I hear about all the brilliant things the outstanding people are doing, it makes me want to take a nap.  I don’t have the time or energy to keep up with that.  Anyway, it sounds like they have it under control… Don’t we have anything to eat in this house?… I wonder what’s on TV?

In that moment, as inspiration fades in the face of inertia, it’s important to remember that when it comes to making the world – and Waco – a better place, the real power is not with the few “outstanding” ones in the convertibles, it is with us plain old folks in the pick-up trucks. Yes, we ordinary folks who make up the big middle section of the bell-curve of humanity are the ones who hold most of the cards – and most of the responsibility.

Imagine, though, how much cleaner and more beautiful our city would be if, in addition to the outstanding work these few people are doing, a whole herd of us middle-of-the-pack folks consistently did just a little bit of mediocre work.  What if 10,000 of us, for example, made it a habit to pick up just one small bag of trash a week.  Our city would go from litter full to litter free!  (Of course the best thing would be if ALL of us in the middle of the bell curve had the habit of disposing of trash properly in the first place.)

The key word is habit.  Habits are what give the multitude of us garden-variety folks our super powers.  Occasional big efforts are admirable and exciting, but, honestly, it is the everyday habits of the majority of us average folks that have the potential for making the biggest difference.  The water wears away the stone not in one big splash, but by constantly dripping on the same place for a long time.

Small positive behaviors, carried out regularly by a bunch of us run-of-the-mill people can have a bigger effect on the health of our community than occasional heroic efforts by a few.  Here are some examples of the kinds of things we could easily be doing…

Take a walk in the neighborhood once a week or more. – If we all get in this habit we will end up with healthier, safer neighborhoods where we know each other better.  Those kinds of neighborhoods are the building blocks of strong cities.

Lean toward local. – We don’t all have to take a blood oath to never set foot in a big box store or a chain restaurant, but we can get in the habit of making local restaurants and stores our default choice.  Consistently patronizing our local businesses helps them thrive and gives our community it’s unique flavor.

Volunteer a little and give a little – Volunteer for just an hour, but do it consistently once a month or once a week.  Even the smallest effort – picking up one bag of trash – done consistently makes a difference.  Give $2 or $3 a week to an organization you care about, but give it every week.  It doesn’t have to be a huge commitment – an hour or two a month of consistent volunteering or a few dollars a month of consistent giving adds up when enough of us do it.

Our power as members of the middle of the bell curve is not in doing an exhausting amount of good, it is in more of us making a habit of doing a very reasonable amount of good consistently.

So thank you outstanding folks!  We appreciate your herculean efforts on our behalf.  Now the rest of us have few little things to get done before we take our naps! 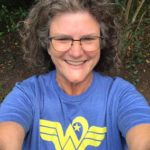 This Act Locally Waco blog post is by Ashley Bean Thornton, she works at Baylor, and helps out with Act locally Waco. She likes to walk. If you see her, honk and wave and say “hi!”