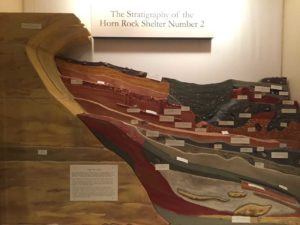 Did you know that people have always loved living in Central Texas?…and I mean ALLLWAAAYS!  There are archaeological sites in the Waco area which appear to have been continuously occupied by humans for at least 12,000 years.  One of those is a rock shelter on the banks of the Brazos River in Bosque County.  Naturally carved out of bedrock by the river, the Horn Rock Shelter contained one of the most completely preserved records of human habitation ever discovered. From roughly 1966 to 1989, avocational archaeologists and locals Frank Watt, Al Redder, Robert Forrester, and L. T. Francis accomplished the huge task of excavating and mapping the site.

The Smithsonian has taken a keen interest in artifacts associated with two skeletons found at the site, and much of the material is now under the care of the Division of Physical Anthropology in Washington, D.C. The burial of an adult male and a teenage girl appear to be some of the oldest documented remains in North America.

For a worthwhile daytrip out of Waco, visit the Bosque Museum in Clifton.  They have a great exhibit on the Horn Shelter, and also focus on the vibrant Norwegian settlement and heritage in this area. This facial reconstruction (see picture at left), displayed at the Bosque Museum, was derived from a reproduction of the adult male’s skull discovered at the Horn Shelter by Al Redder and Frank Watt in 1970. Examination of features of the skull establish that the Horn Shelter Man could not be related to the American Indians. A date has been determined for the site of approximately 11,200 calendar years ago. This makes the adult male skeleton found at the Horn Shelter the first known inhabitant of Bosque County.

Ongoing DNA analysis could reveal a lot about our collective history, and our assumptions about the first Americans.  Artifacts from the site, including stone and bone tools, and human-modified remains of several animals, can tell us about the landscape before our memory.  We learned through this excavation that giant armadillos roamed along with bison, beaver, deer, badger, coyote, hawk, and giant tortoises (yes, they lived here too—maybe not as big as the Galapagos ones, but still pretty huge). Humans hunted and used many parts of these animals to survive in their harsh environment.

Come visit the Mayborn Museum and the Bosque Museum to see artifacts from the Horn Shelter, and you might learn a little more about yourself! 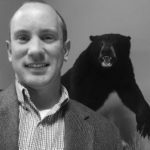 Trey Crumpton is Exhibits Manager for the Mayborn Museum Complex at Baylor University, where he has been on staff for 11 years.  He has lived in Waco since 2001, is working on his Ph.D. in Leadership Studies, and has two energetic kids who help him discover.  His beautiful wife Ashley is an early childhood educator, and together they are proponents of all things enriching and fun.  Trey loves family, friends, the outdoors, the lake, pizza, good books, and good film.