I went to the “March for our Lives” rally Saturday, but I did not really want to go.

I do not like political rallies and protest marches.

Sure, I can appreciate a clever sign and an inspiring speech as much as anyone, but once the initial emotional high has worn off, I feel bad.

I have a democrat sticker on my car and I have heard people say that means I hate guns.  I don’t hate guns. I would characterize my feeling toward guns as neutral.

I don’t personally own a gun. They are not interesting to me, so I spend my money on other things.   Also, I am pretty much blind in one eye…the one you need for shooting it turns out.  So, there’s that.

I do not hate guns.  Most of the time I don’t even care about or think about guns.

One reason I have the luxury of not caring about guns is that most of the people who do own guns are very responsible with their guns.  Most gun owners are responsible. I get that.

I bet most gun lovers can understand why I believe some people ought not to have guns.   I believe we could have a fruitful conversation about where to draw those lines and how to enforce them. I believe we could make some headway that would keep us all safer.

When it comes to “assault guns” or “AR-15’s” or whatever the right word is for guns that fire many, many bullets incredibly quickly…I don’t like them, but I can understand why some people might not want to have them banned completely.  I bet most gun lovers can understand why I think the standards and rules for owning such a dangerous weapon should be very, very strict.  I bet if we got in a room together with the goal of coming up with rules we could both live with on this matter, we could come up with something that would move us down the road.

There have always been and always will be trade-offs between freedom and safety. We can’t protect ourselves or our children from every harmful person, but we can work together to get better at it than we are doing now. I believe that’s what we should do.   Or more to the point, I believe that is what our elected representatives should be doing in our names.

I don’t really like rallies and marches because I feel like, if we are not careful, they become opportunities for vilifying each other, reinforcing our worst opinions about each other and making it harder than ever to work together.

So why did I go to the “March for our Lives?”  Honestly, I succumbed to peer pressure.  My friends were going, so I did.  And, despite my misgivings, I’m glad I did.

The young people who spoke were magnificent! Smart and poised and well-reasoned, they gave me hope for the future of our country.

Also, bluntly, the way I wish we would work together doesn’t seem to be working.

As I stood in the sun listening to the speeches, I thought about how long we have been trying to figure out how to protect our children and ourselves, and it seemed to me we have made no progress.

As I looked around at the crowd of hundreds in Waco (and the pictures that showed crowds of thousands, and possibly hundreds of thousands in other cities) I thought, “I guess this is what it takes to make progress. It takes bodies getting out into the street. It takes showing the sheer physical mass of people who care about an issue. This is what it takes to get an issue on the table.”   I understand this is what it takes, and I am so very grateful to those hardworking souls who are making it happen, but I still wonder why … why can’t we just talk? I wish we could. 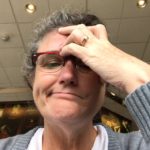 This Act Locally Waco blog post is by Ashley Bean Thornton, she has lived in Waco almost 20 years now. Far longer than she ever lived anywhere else. She likes to walk. If you see her out walking, honk and wave and say “hi!”