Celebrating May as National Bike Month

May is National Bike Month! According to the League of American Bicyclists, National Bike Month was established in 1956, and is a chance for communities across the country to showcase the many benefits of bicycling — and encourage more folks to giving biking a try!

Fostering bike culture and expanding opportunities for bicyclists in Waco is important for a lot of reasons: riding a bike is cheaper than driving a car, and a bike is sometimes the primary mode of transportation for those who don’t have access to or can’t afford a car; riding a bike promotes individual health; bicycling instead of driving helps to reduce emissions and preserve clean air in our community; and exploring our community by bike is a way to discover the hidden gems in Waco that you may otherwise miss while driving a car.  Whenever a person chooses to ride their bike they potentially free up a parking spot for someone else. That is Waco Friendly!

Last year, the Waco Metropolitan Planning Organization (MPO) issued an online survey where we asked people to tell us about their transportation and travel habits. Unsurprisingly, when asked how they usually travel around town, over half (56%) of respondents answered “drive by myself,” as compared to 13% percent that answered “ride my bike.”  However, when asked how they would prefer to get around, the percentage of car-based trips decreased substantially, and trips made primarily by biking (or walking) increased, such that the preference for driving, walking, and biking was fairly evenly split (between 25% and 27% each).

When we asked more detailed questions about survey respondents’ experience with biking as a mode of transportation (as opposed to recreation), it became clear that lots of Wacoans want to get on their bikes but are prevented from doing so, or are hesitant, for a few common reasons:

One way to tackle these concerns is to build out our community bike network, and expand education and safety materials, with the novice bicyclist in mind. The novice bicyclist feels comfortable on lower-speed roads where motorists expect to see people on bikes, and prefers to be physically separated from cars when possible (such as buffered bike lanes and off-street bicycle/pedestrian paths or trails). The MPO is working on an Active Transportation Plan that will help to guide expansion of the bicycle network in the future. The plan will incorporate a lot of the feedback that was received from the online survey. However, in the meantime, here are some available resources that may help to address these common concerns:

I don’t know safe routes to ride! The MPO has developed a bicycle suitability index that is available online (here). This index rates arterial or collector streets in city limits (and several county roads) on a sliding scale, based on the potential level of comfort for a novice bicyclist. Rating levels include Easy, Moderate, Difficult, Not Recommended, Extreme, Under Construction, Prohibited, and Not Evaluated. Roadways in Waco city limits that don’t have a rating are usually “local” neighborhood streets, which are typically lower-speed, lower-vehicle-volume roads that may be comparable to an Easy or Moderate rating. The suitability index considers factors such as vehicle speed, traffic and truck volume, on-street parking, slopes/hills, land uses, etc.

There’s no place to bike! In McLennan County, we have 24 miles of bicycle infrastructure on the ground (including bike lanes, signed bike routes, and off-street multi-use paths such as the riverwalk and Cottonbelt Trail. The city of Waco has made a lot of progress over the past few years in expanding opportunities for biking in our community. For example, a new section of the riverwalk opened in late 2017, which means there is now a 5.5 mile continuous off-street loop for pedestrians and bicyclists along the Brazos River. Buffered bike lanes are available for use along Panther Way, and upcoming capital improvement projects will offer additional bicycle/pedestrian connectivity along Ritchie Rd and in the vicinity of Midway High School.  In 2017, the City of Waco installed new bike route signs along University Parks and 11th/12th Streets.  Also in 2017, the city was awarded two competitive grants to improve pedestrian and bicycle connectivity. The first will include upgrading the newly signed bike routes on 11/12th Streets to striped bike lanes (construction expected later this year). The second project will include bicycle accommodations starting at University Parks Drive, heading up the Washington Avenue Bridge, and up Elm Avenue to Forrest St. This will include a combination of bike lanes and shared lanes with pavement markings (sharrows), and construction is expected to start in 2019. The city is also exploring the possibility of starting a pilot bike share program.

I’m scared of the cars! The MPO has been working with the Waco Bike Club to develop or distribute educational materials focused on bike safety. However, this is an area that will require more focused effort in the near term. In the meantime, the city of Waco has applied for recognition as a Bicycle Friendly Community. As part of this application process, the city will receive advice on how to improve in areas such as education and safety training.  However, one way that everyone can help is to build and promote bike culture in Waco. Bicyclists also drive cars too — so the more people we can encourage to get out there and ride their bike, the more informed drivers we will have on the road.

Another way to get more comfortable biking is to participate in a group ride. The Waco Bike Club is one organization that regularly sponsors these events and welcomes riders of all experience levels. You can check out their Facebook page (here), for upcoming events. Specifically for Bike Month, the Waco Bicycle Club is inviting you to participate in two events:

Meet at the fountain in Heritage Square, View the event page on Facebook (here).

On May 16, Waco will participate in the national Ride of Silence ride to honor and remember those who have been injured or killed while cycling on public roadways in our community, and increase bike safety awareness. The Waco ride will include a stop at the White Bike on Franklin Ave to remember David Grotberg.

Meet at the fountain in Heritage Square, View the event page on Facebook (here).

Critical Mass is a community bike ride occurring on the last Friday of every month. Rides start downtown at the Heritage Square fountain (in front of City Hall) at 6:00 pm. Generally the ride is about 7 miles long (approx. 1 hour). In the past, Critical Mass rides have meandered along the Brazos, explored Elm Avenue, and cruised through Oakwood Cemetery. Critical Mass is open to riders of all experience levels, although children should be accompanied by an experienced adult.  If you’re bringing your kids, we encourage you to practice riding before attending (more biking, yay!).

We hope that our pleasant spring weather and longer daylight hours motivates you to get out and ride your bike during Bike Month! 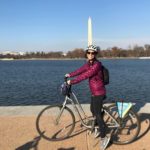 Chelsea Phlegar, AICP, is a Senior Planner with the Waco Metropolitan Planning Organization. She also serves as the MPO’s active transportation coordinator, and spends her days working to improve multi-modal connectivity in McLennan County. On the weekends you can find her snacking her way through the Waco Downtown Farmers Market or “running” along the riverwalk.