Martin Luther King Jr : A Hero, not a Super-Hero

In 2011 my husband and I participated in a fantastic program called a Church Swap. It was organized by Ramona Curtis and Mia Moody-Ramirez under the auspices of the W. K. Kellogg Foundation, The Waco Foundation and the Waco Community Race Relations Coalition. The central element of the program was (as the name suggests) swapping churches for three months: White people going to African-American churches and African-American people going to White churches. In addition to that central experience, the funding for the project also paid for a group of us “church-swappers” to go together on a Civil Rights Tour. One of the stops on the tour was the National Civil Rights Museum which is housed in the Lorraine Motel in Memphis, Tennessee. You may remember the Lorraine Motel as the site where the Reverend Dr. Martin Luther King, Jr. was assassinated on April 4, 1968.

As you might imagine, touring that motel and seeing the exact spot where the assassination took place is an emotional experience. It was eerie, sad, angering, inspiring …the list of feelings goes on. It would be an understatement to say it gave me quite a bit to think about. In the midst of this reflection, I wrote my mom a letter telling her about our visit to the museum, sharing some of my feelings and asking her if she had any particular memories of what it was like during the time when the assassination happened. She surprised me by writing back, “You might not remember it, but we were living in Memphis on Tahiti Lane when MLK was killed.”

I didn’t remember that at all. I knew we had lived in Memphis for a couple of years when I was little, but I hadn’t worked out the dates to figure out that we were there when the assassination took place. It turns out I was six. 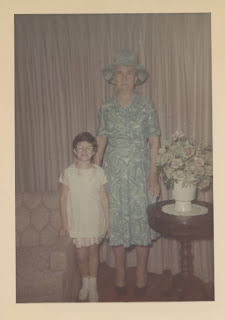 When I got home from the tour, I dug through some old pictures and found a picture of myself at that age. In the picture I’m standing with my Granny Mears. Up until that point I guess I had always thought of Dr. King as a “super hero,” larger than life, fundamentally different from me and people I know. Even though I knew intellectually that his assassination took place during my lifetime, it was never really “real” to me. I thought of it as something that happened a long time ago in a place very different from any place I had been – another time, another world. In other words, I had never thought of Dr. King as a regular person.

Seeing this picture of myself at the age I was when he was killed, and finding out that I was living in the same city where he was killed, at the time that he was killed, changed my way of thinking about him. I feel a more concrete human connection. He was a “regular person, ” a human being like me. I think it is important for me to remember that my heroes are human beings like me. They live in the same cities where I live. They eat the same food and drink the same water. They probably get pictures of themselves taken with their grannies. As a part of our honor and reverence for Dr. King and other personal heroes, it is important to remember they are not “super-heroes from another dimension.” They are not fundamentally different from the rest of us. They are fundamentally the same. Or perhaps more to the point, we are fundamentally the same as them. We share the same responsibility to do our part to make this world the place it should be. To forget or ignore that most basic of facts is a way of letting ourselves – myself – off the hook.