A couple of months ago Kari Tingle at the non-profit organization V.O.I.C.E. (Viable Options in Community Endeavors) asked if I would speak about poverty and community service for the “Pathways to Success” group.  Pathways is a program she helps facilitate for high school students. “We cover a variety of topics,” she explained in an email, “things that we believe will help them be better leaders.” I said I would be glad to do it.

I had all good intentions of coming up with a presentation so amazing that it would dazzle even the most studiously indifferent teenager. But, on the night before the group was to meet, I realized I didn’t have time to come up with even a boring speech, much less one worthy of shaping the leaders of tomorrow. I decided to go with a group discussion instead. It would be much quicker to write — all I had to do was come up with some questions. 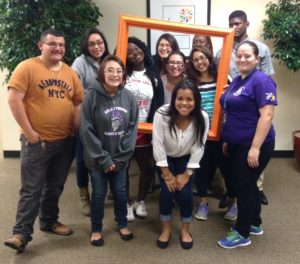 The group was just finishing up a meal of chicken strips and ham sandwiches when I arrived. There were eleven students in all. They came from various local high schools including Waco High, University, Robinson, some of the charter schools and maybe some other schools I am forgetting.

They were chatting and laughing and teasing each other when I walked in, but, predictably I suppose, that all came to a halt as soon as I actually wanted them to talk. I had to do some prodding and poking to get them to speak up and to stretch their short answers to my questions into longer ones. In the end, though, they gave me plenty to think about.

“What is poverty?” I asked.  Once we had agreed on a definition, I gave them a short spiel on the government’s definition.  I had them draw pie charts guessing what percentage of people in Waco had incomes below the poverty guideline.  Their guesses were pretty close to the real amount – 30%.  I followed with, “What are some of the bad things that can happen to a person when his/her family doesn’t have enough money?”

Eventually I asked, “If you and your family have enough money, is it important to care about families who do not have enough money? Why and why not?” Most of the students immediately said, yes, we should care. I played the devil’s advocate with them. “I work hard. I earn enough to support my family. Why should I worry about someone else’s family?”

This is the part of the conversation that I keep returning to in my mind. I really liked what they had to say. I don’t think they were trying to be especially profound. They were just saying what they thought, the first things that came into their minds. Maybe that is why their comments struck a chord in me.  I’m afraid I can’t quote them exactly word for word, but I think this is a pretty fair representation of their ideas:

One girl focused on education. “What if the person who would have discovered the cure for cancer is living in South Waco right now?” She asked. “What if because her family doesn’t have the money they need, she is not getting a good enough education? Then we won’t get the cure for cancer as soon as we could.”

Another student explained the financial practicalities of caring about those with no or low income. “If you have money, it costs you money in taxes to pay the benefits to people who don’t have enough money. If they could be making enough money on their own, you wouldn’t have to pay that money. So we need to help them be able to make more money.”

According to the Texas Education Agency 2013 snapshot information, 87% of WISD students are considered economically disadvantaged. It occurs to me that, based on that figure, the ideas we were discussing were pretty real for these students. They had probably experienced poverty and low-income  at close range, either first hand in their own families or from observing the lives of their friends and classmates.

It also occurs to me that these young people are not children. Several of them are in JROTC. In the next year or two, they could be starting careers in one of our armed services. Some of them are taking dual credit courses at TSTC or MCC. They are making decisions right now that will affect the incomes they earn for the rest of their lives.  All of them will be old enough to vote in a year or two. They are already taking on adult responsibilities and will be taking on more very soon.

Our discussion about poverty and these follow-on thoughts leave me with mixed feelings. I feel encouraged and impressed with what the students had to say. I feel thankful for programs like “Pathways to Success” that provide a place where young people are challenged to think about serious issues.

At the same time, I feel concerned. Are our young people having enough of these kinds of conversations? Are they learning how to clarify and articulate their thoughts about important, complicated social problems? Do they know how to look at both sides of an issue and how to separate fact from opinion? We had a good first conversation, but I feel like they need more practice. They need more coaching on this kind of citizen-work. They need to develop their citizen-skills and citizen-muscles. I worry that they are not getting enough of that kind of exercise.

Also, I feel a little wistful. Their answers were simple. I envy that. At what point in our lives does the issue of poverty get so complicated and controversial? When is it that we lose sight of the idea that we need to make sure the kid in South Waco is getting a good education, because she might be the one who could find a cure for cancer? When do we stop understanding that if we don’t help people earn more money, it will end up costing us more in the end? When do we forget that everybody needs help sometimes? 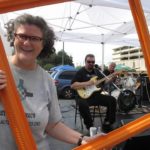 “Pathways to Success” is a program of V.O.I.C.E. a local non-profit that works with young people and their families.  The Pathways program focuses on leadership development for students in high school. Any high school student is eligible if they meet the following requirements: maintain a B average in all classes, abstain from tobacco, drugs and, alcohol, and commit to volunteer a minimum of 46 hours of community service throughout their time in the program. The 2014-2015 Pathways group is already set, but VOICE will begin taking applications for the 2015-2016 group in mid to late summer. If you are interested in learning more about Pathways or VOICE please call 254.741-9222 or email Cheryl Allen at [email protected].