Nothing’s all black, but then nothing’s all white…why I’m talking to my kids about Charleston…

–Stephen Sondheim, Into the Woods

When I look at my children, I don’t really see their outward appearance. Perhaps this is why they are more often than not dressed in miss-matched outfits, their hair is more matted than brushed, and they have to complain of the blisters on their feet before I realize they’ve outgrown their shoes. For better or worse, my husband and I work to meet their basic physiological needs and then spend the majority of our parenting efforts on their behavior and attitudes—and our kids are precocious, so this is a more monumental task than we bargained for.

If I’m being honest, I should confess that we’ve never had a true parenting strategy session about how to talk to our kids about race relations in our country. We’ve kind of just navigated our path, generally on the same page, and things have worked out just fine. With just a little coaching, my kids started calling my skin peach, daddy’s skin dark brown, and their skin brown—because dark brown and peach make brown. These nomenclatures have stuck, giving my preschoolers a way to describe their world and their friends without having to understand the complex social and psychological issues behind race relations in America.

On June 17, a gunman opened fire on a Bible study at Emanuel AME Church in Charleston, and my heart exploded with emotions that catapulted me into deeper contemplation about how we talk about race in our home and how my children are viewed in the Waco community. Let me be clear, my family has never experienced any overt racism in Waco. We’ve never felt physically threatened, and certainly have never had our lives in danger. We are blessed. We have been lucky. I also know, however, that if my husband and children had been in that church basement, they would have been the assassin’s targets just like the nine victims who share their skin color. When I think of the tragedy in that context, my instincts go on overdrive and I want to start attacking the world. I want to hunt down any and all injustices and do rhetorical battle, and I want to win. I want to seek out the adversaries and annihilate them with pithy arguments, litigation and prosecution. I want to go on the attack in a grandiose way to tackle the enormity of the task at hand.

But then I take a deep breath and look to the example set by Dr. Martin Luther King, Jr. when he delivered the eulogy for the victims of the Birmingham church bombings in 1963 saying, “[The victims] say to each of us, black and white alike, that we must substitute courage for caution. They say to us that we must be concerned not merely about who murdered them, but about the system, the way of life and the philosophy which produced the murderers.” And then I know that there’s a way to affect the community in which my kids will grow up without leaving people in my wake. It starts in my own home by changing our dialogue about race and bringing it to the forefront of our efforts to mold and shape our kids into the humans that we hope for them to be, that we need for them to be.

I will tell my 6-year-old daughter and my 4-year-old son what happened in Charleston because I want them to be a part of a society that does better, that produces more love and less hate. I will say to Miles, whose name means solider, “This is why my heart breaks every time you ‘play’ guns with your friends at school. Killing people with a gun is not playful and should not be fun. Yes, there is a time to fight injustice. Let’s learn to fight by choosing to lead by peaceful example instead.” I will say to Karis, whose name means grace, “This is why, when you say that you feel different at school and that kids tell you you’re not pretty because you don’t have blond hair, I’m extremely sensitive about you being ostracized and picked on by students and teachers alike. Forgive the friends who are mean to you and be kind to everyone always. Know that the content of your character is more important than your appearance.”

And, I would have this conversation with my kids even if their skin weren’t half black. Yes, I pray for peace and comfort for the Emanuel African Methodist Episcopal Church and the friends and families of the victims, but I also pray that we all find a way to do something to change the system and the philosophy that produces these heinous crimes against humanity, even if that something starts with a simple conversation with our kids. 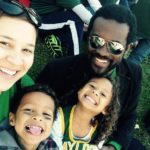 This Act Locally Waco blog post is written by Megan Henderson. Megan, by virtue of taking her husband’s last name, is often confused with the executive director of Waco Downtown Development Corporation. This Megan Henderson, however, works at Baylor University in Institutional Events and as an adjunct professor in Baylor’s department of journalism.