I would like to take the opportunity to thank Dang for being so kind to my youngest son Perry! Hoang Dang is a Baylor Graduate who became my son’s mentor through the Big Brothers and Big Sisters program when Perry was about 9 or 10 years old.

Having technology in college nowadays is a must since everything is done on computers from lecture notes, to tests! About two weeks ago Dang called me and said to take Perry to Barnes and Noble. He asked me not to tell Perry why he was there. Dang wanted it to be a surprise to him.

It was difficult to surprise Perry with a trip to Barnes and Noble because he knows that I get tired of going there — he loves that store. When we went in he asked, “So why are we here Mom?” My reply of “Oh! I just I came to pick up something,” only fueled the fire!

I don’t think Dang could get a word in edgewise between Perry’s “Thanks Man!” and his “Oh! My God! Thanks!” Last week Perry received Dang’s older (looks like new) iPhone! What a blessing and a big help in college! I had been searching to find a used model for Perry’s birthday on the 20th of this month, but even they were too expensive. Perry, was so happy! He had received some very disappointing news earlier that day.

Big Brothers and Big Sisters is a worthwhile organization especially for children like my son who are from a single parent household. I was married to Perry’s Father and went through a terrible divorce! However, it does not matter HOW you’re single parent, you are still a single parent and when a person dedicates himself to your child and actually helps him over and beyond what he is required to, it is a big blessing! 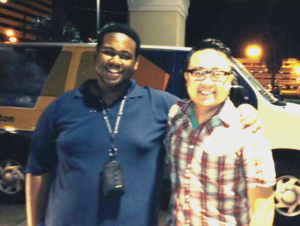 I thank God for Dang!

I thank God for the Big Brothers, and Big Sisters Program in Waco, Texas, that helped my son and Dang to meet and form a lifetime relationship!

Dang taught Perry so many valuable lessons such as how to be a Christian male, how to be respectful, how to study and stay committed to your education, and how to work hard for what you want out of life. Dang believes in these principles; that is why he’s about to become a Medical Doctor in the coming months. Because he took the time out of his busy life to mentor and bless my child, God is taking the time to bless him!

Dang taught Perry how to play chess when he was very young and he has not forgotten it! He taught him how to reach and obtain his goals and he has not forgotten that either. With the encouragement from Dang, and his other mentor Garrett League, and his biological big brothers Steve and Kendrix Wilson, Perry finished his second semester of College at TSTC and he passed his classes! This Semester has been a very, very difficult time for Perry, but he pushed through it with his faith in God.

Thank You Dang for caring for my child!

This Act Locally Waco blog post was written by Hattie McGill.  Hattie is a mom of three sons, an author and she is known regionally as a gospel singer. She recently appeared in the Waco Civic Theatre production of the musical “Crowns.” Her children’s book, Daddy Practice What You Preach: Come Home Daddy, is available on Amazon.com.