Breathing Culturally: Identifying as Latino, a “Baylor Bear”, and a Wacoan (Part I)

I moved to Waco in 2012. Like many of the stories you’ve heard before, I moved here because Baylor offered me a job. My first time in Texas was the day of my on campus interview. The first restaurant I went to was “Bangkok Royal” for my initial interview – which also happened to be the first place where I met my now wife, Monica, but that’s a separate story. I knew Waco would become home the moment I discovered that HEB sold Harina PAN, a special type of maize flour used to make the traditional Venezuelan arepa in the “international foods” section. I took a picture of it and texted my parents saying: “I think I’ll be alright here!” (If you’re interested in trying arepa, I recommend going to the Colombian food truck at University Parks or at the farmer’s market, “Mi Cali Bella.”)

At first, moving to Waco was a bit of a confusing experience, to say the least. Not being from Texas, I experienced culture shock immediately after my first trip to the grocery store, or in simpler terms, HEB. I picked up a couple of groceries and after going through the checkout line, I greeted the cashier with a friendly “how are you?” to which she responded, “I’m BLESSED!” I immediately told myself, “wow, what a positive outlook on life!” Little did I know that “blessed” can have multiple meanings or no meaning at all, depending on the context.

Now that I’ve lived here for a couple of years, people often ask me all kinds of questions about Waco. Once I get past the usual “Fixer Upper” questions, they tend to ask me about my work at Baylor and what I do for fun. It’s a tricky question because as a residence hall director, I don’t have much of a regular routine since working with college students can be rather unpredictable. However, I generally answer that question with something along the lines of “you know what, I don’t quite know, but I feel very at home in Waco.”

But what do I really mean with that, you may ask? I grew up in Venezuela to a Venezuelan mother and a Slovenian father. In the United States, I identify as Latino, and being Latino in America is a rather complex identity (I will talk more about this next Sunday, Part II). Being of Venezuelan origin makes me a rare breed in Waco, mainly because this is a heavy Mexican descent region. I never thought I’d learn so much about places like Zacatecas (the Mexican state, not the taquería, although, I do like their tacos!) and my Mexican colleagues often make fun of my Spanish accent because to them, I sound like a telenovela (hint: generally speaking, Venezuela is known for having oil, winning the most Miss Universe pageants, and their soap operas or telenovelas). While most of us identify as Latino or Hispanic, I have learned a great deal about what it means to be of Mexican descent in the context of Central Texas, which is fascinating!

Additionally, I am also very invested in the work I do and my students at Baylor. For the most part, my schedule is heavily influenced by Baylor’s calendar, and to be perfectly honest, I love my job. I have also learned a lot about our “town and gown” relationship and the way in which institutions such as Baylor, MCC, and TSTC interact with the city and vice versa.

With that being said, how does one embrace the Wacoan in you while claiming various, often times, opposing identities so strongly? In my opinion, you appreciate the small and big things your city has to offer. Sure Waco has Baylor, Magnolia, the Texas Sports Hall of Fame and the Mammoth site, just to name a few. But it also has a unique blend of people and a welcoming culture/environment that allows you to fit in and most importantly, belong– and yes, having HEB with a heavy section of Goya products does help!

In part 2 next Sunday, I will go more into detail about the meaning of these various social identities and the way in which they’ve impacted my work, my relationships, and the way I engage with the city. 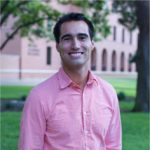 Jorge Burmicky currently works at Baylor University in the department of Campus Living & Learning. He’s passionate about college student development and contemporary issues in higher education, particularly access and retention of underrepresented students. He is married to Monica who works at McLennan Community College as the director of TRIO Student Support Services. They are expecting their first born (baby girl!) in June and couldn’t be more excited about it!