There’s No Rescue at the End of Jesse’s Story

Human beings are storytellers – we look for meaning through narrative, craft pattern and purpose from the sometimes random-seeming events of our lives. Ideally, stories create meaning and – even more ideally – they have a happy ending.

The story of Jesse Washington doesn’t have a happy ending. Jesse died on the threshold of adulthood, violently and in agony, as those in power literally stood by and observed; as 15,000 white residents of Waco and McLennan County not only watched but cheered, struggling through the crowd to get closer, to abuse and mutilate Jesse, to inhale the scent of his burnt flesh as he was roasted alive over an impromptu bonfire, to throw broken-up furniture onto that fire, to kindle the flames higher.

There’s no rescue at the end of Jesse’s story. No one prevents Jesse’s pain, or even puts him out of his misery. There’s no mercy killing; he lives for hours and is slowly burnt and hacked to pieces, until at last death brings peace to his soul – if not to his body. No one who attended seemed to feel bad for their participation in this atrocity; families watched the lynching with their children. Some of those children paid 25 cents for a link of the chain upon which Jesse’s body had been hoisted; later – when Jesse’s body had been abused to the point of disintegration – they sold Jesse’s teeth for $5 each.

Jesse’s death didn’t happen in the dark of night. It wasn’t hidden away in the woods. It happened just outside the courthouse, on a Monday, at lunchtime.

The story of Jesse Washington, which began in 1899 when he was welcomed as an infant into a loving home, in or near Robinson, Texas, doesn’t have a happy ending.

For a few decades, the story of Jesse Washington’s death was told as a warning about Waco; W.E.B. Dubois published an 8-page expose featuring graphic photographs of Jesse’s murder, and later penned the short story “Jesus Christ in Texas,” inspired by Jesse’s story. The NAACP was galvanized by the Waco Horror, as the story of Jesse’s lynching came to be called. And in Waco, Jesse’s family, like other African American families affected by lynching – which is to say, like all African American families – passed the story of Jesse’s death down the generations, a cautionary tale. Step out of line? Those in power in McLennan County – and all over the south – have proven what happens to black folks who do that. We have the stories to prove it.

Lynching is the act of putting someone to death, especially by hanging, by mob violence and without legal authority. Another word for “lynching” is “murder.” Lynching is mob justice; lynching is murder; lynching is social control.

One hundred years have passed since the sunny day when Jesse Washington, a 17-year-old field laborer, was accused of murder, tried, convicted, and dragged from the courtroom by some of the 2,500 white Wacoans who had crowded in to see the trial. That story is written; justice was not done.

We can’t rewrite history – although we sometimes try. We can’t deny what happened a century ago, in the time of our grandparents and great-grandparents. We can pretend to forget. We can say, “That story doesn’t belong to me. It doesn’t belong to my people, my tribe” – but we do so at our peril.

The story of Jesse Washington – painful, shameful, terrible, true – is our story. Waco’s story, Robinson’s story, McLennan County’s story. It’s a story told not only here but all over Texas, all over the south, all over the U.S.

And that story is written.

And – it is not the only story, or the last story, that will be written about Waco, about us.

We – today, now – cannot rewrite the story of Jesse Washington, but we can decide how Jesse Washington’s story shapes narratives as yet unwritten. We can decide to mourn for Jesse, to hold his family in our hearts, to surround all the families stained by our lynching past with love and care, to rededicate ourselves to the creation of a community which promises and delivers justice and compassion to all: the greatest and the least, the most powerful and the most vulnerable. 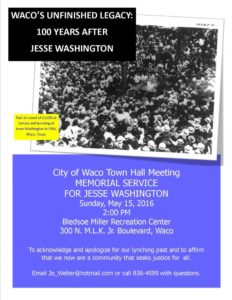 We are invited to remember Jesse’s story, and to consider our own stories for the future, with a memorial service in Jesse Washington’s memory. Please join us this Sunday at 2 p.m. at Bledsoe Miller Recreation Center (300 N. MLK Jr. Blvd.) as we begin to create a new meaning, a new journey, a new story for our community: together. 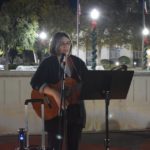 Kristen Cervantes is the pastor at the Unitarian Universalist Fellowship of Waco, and a Waco native. She is on the board of the Greater Waco Interfaith Conference, and has been an active part of planning Waco’s commemoration of the life and death of Jesse Washington. She is also a member of the Community Race Relations Coalition and KWBU’s Community Advisory Council. In her spare time she reads, writes, makes music, and watches superhero movies – sometimes at the same time.