The Magnificent Colors of Waco

“We are a box of crayons, each one of us unique. But when we get together the picture is complete.” 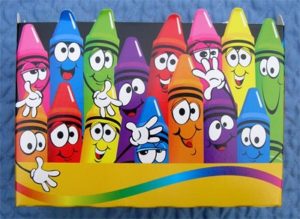 The other day I was getting my nails done at a shop in Waco.  The shop is run by an opposite-sex, middle-aged, Asian couple.  There was a Black mother with her three daughters getting their eye brows waxed.  Then an older, White woman walked in.  I was at the counter paying as she pulled up a picture on her phone.  It was a picture of nails decorated with the confederate flag.  She was asking if they could decorate her nails the same way.  As I was walking out of the store, I saw a Black, female, same-gender couple holding hands as they entered.  In a short window of time I got a snap shot of Waco that has not been my typical experience.

In my very being I embody diversity. Of my four grandparents, three were born in countries outside of the United States.  One grandpa was born in Turkey, one grandma in England, and my other grandma in Cuba. My mother was born in England and my father in Cuba.  My dad grew up going to the synagogue with his dad and Catholic Church with his mom. I grew up in the 80’s and 90’s at the height of racial integration of the public schools.  In recent years, schools appear to be reverting back to pre-80’s segregation, but the school I grew up in was very diverse.  In my high school classes in Northwest Houston, I had friends from many different racial and cultural backgrounds. I had Black, Nigerian, Indian, Asian, Mexican, Salvadorian, White, and mixed race classmates.  There were students that were Muslim and wore hijab’s over their heads. There were Catholic students, Evangelical Christian students, and students with no religious affiliation. There were recent immigrants and students from families of many generations in the United States.

Diversity, simply put, is all that makes us different. Just like in creation we find a vast array of differences among flowers and trees, we as humans can be so immeasurably different from one another. Our differences can be as mundane as curly hair vs. straight hair, or as controversial as gay or straight, democrat or republican. Walter Lippmann said “Where we all think alike, no one thinks very much.”  Engaging with those that are different than us, when done in a respectful and humble manner, can provide a healthy challenge to our thinking and acting.

Our differences also have the potential to divide and harm us. As humans, our craving to be right can cause us to fail at compassion.  We can fail at experiencing the splendor of our differences because, at times, we cannot agree to disagree.  In our failings, we can intentionally or unintentionally harm others. We can let fear and judgment drive us and miss opportunities to radically love and experience the infinite display of beauty amongst us. We can get stuck in the purely green grasslands in parts of central Texas and miss out on the fields and fields of brilliant blue bonnets in Ennis, Texas. Remarkably, we have the power to make choices. We have the power to choose to profoundly engage with those different from us. We have the potential to expand all that we can experience in this life and get closer to reaching our full potential as humanity.

I recently got to participate in yet another picture in Waco of unity across differences as I attended the 100-year anniversary memorial service for Jesse Washington, a Black teenager who was brutally tortured and lynched in Waco in 1916.  The room was full with an estimated 250 people from different races, religions, sexual orientations, gender identities, ages, national origins, and genders to name a few.  In the midst of our differences, in that moment, in that space, we were unified in the remembering of a horror from the past and looking towards hope for the future.

As Waco continues to develop its identity and culture as a city, I hope we can become more and more a city that welcomes and embraces diversity. Not diversity that inflicts harm on others, but diversity that causes us to be challenged in our assumptions and see the exquisiteness in every human being. As I always tell the students I work with, if we were all the same, this world would be so boring. It can be easy to use what is familiar to us as a measuring stick for right and wrong, moral and immoral. But if we can take the time to really get to know people that are different from us, we can begin to see and revel in the immense beauty in our diversity. Our eyes can be further opened to the reality that although we may be different, we have the common human experiences of love, joy, pain, suffering, anger, and compassion. May we be a city that takes up the challenge of engaging in and celebrating diversity while preserving human dignity and worth! And as Shane DeRolf talks about in his poem, may our differences add magnificent color to all that we call Waco!

The Crayon Box That Talked

While walking in a toy store the day before today
I overheard a crayon box with many things to say.
“I don’t like Red!” said Yellow, and Green said, “Nor do I!
And no one here likes Orange, but no one knows just why.”
“We are a bunch of crayons that doesn’t get along,”
said Blue to all the others, “Something here is wrong!”
Well, I bought that box of crayons and took it home with me,
and laid out all the colors so the crayons could all see.
They watched me as I colored with Red and Blue and Green,
And Black and White and Orange and every color in between.
They watched as Green became the grass and Blue became the sky.
The Yellow sun was shining bright on White clouds drifting by.
Colors were changing as they touched, becoming something new.
They watched me as I colored, they watched ’til I was through.
And when I’d finally finished, I began to walk away.
And as I did, the crayon box had something more to say.
“I do like Red!” said Yellow, and Green said, “So do I!
And, Blue, you were terrific so high up in the sky!”
“We are a box of crayons, each one of us unique.
But when we get together the picture is complete.” 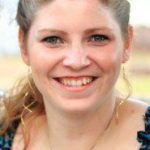 Diamante Maya is a part of an intentional Christian community in the beautifully diverse Brook Oaks neighborhood in North Waco.  She gets the privilege of exercising her passion for cultural sensitivity and valuing the dignity and worth of every human being through her career as a Social Worker and through simply trying to be a good neighbor.