Graveside Remarks for a Relative with Bipolar Disorder

Note: These were David Schleicher’s remarks for a graveside service for a relative that died an untimely death after years of struggling with bipolar illness. Names have been changed for the sake of privacy. These were first posted in TheContranym.com. – ABT

Even after a hundred thousand years, and knowing it happens to every single one of us, we are still not used to death.

On top of that, like few other things can, the death of children before their parents makes us feel like the universe is out of order, that chaos controls our fate, and that we dare not hope for a better future.  I have lost a cousin under similar circumstances.

For Cindy’s service today, our mutual relative Rebecca told me she would not be here. You may not know this, but Rebecca is bi-polar. She said I could explain there was simply too much risk this would throw her into a depression.

For similar reasons I have requested that Michelle in my family, who also is bipolar, arrive just after the service. Or if she gets here while it is still going on, to stand where I cannot see her, because of the risk of my breaking down at the thought of her possibly coming to the same end.

Rebecca has described her own struggle to me as always having a little man in the back of her head, trying to persuade her that she is not loved, that the universe would be better off without her, and that there is only one way to end the pain.

In dark times, she says he is shouting this so loudly he is very difficult to disobey. In good times, he still says it, but she is able to tell him he is a liar and let him fade into the background.

In good times, there are few people more fun to be around than someone like Rebecca, Michelle, or Cindy. In bad times, the hybrid of depression and irritability drives others away when help is most needed.

We know enough now about neuroscience and the personal lives of the famous to be aware that it is often the most special among us that suffer from such conditions. Robin Williams comes to mind.

Looking through Cindy’s photo and memory album today, we were reminded of what a bright, beautiful, and shining light she was. I am passing around her physician father’s favorite photo of her: the very young Cindy examining her infant brother with a stethoscope.

She kept a note from a high school admirer who wrote, “Cindy—well you graduated. You think you’re bad and all. Well I’m here to tell you that you are…” Further down he added, “Even if you drop me like a football or even a baseball, I will always remember you. I reckon you are kinda hard to forget.”

Another page of mementos reminds us of her love for Gone with the Wind, of Godiva Chocolate, and an Eddie Money concert she attended while in high school.

We know these days that it is no surprise that in families that face such difficulties as we face today, one also might find a gifted opera singer (like him over there). Or an over-achieving medical researcher (like him there).

Cindy was accomplished whether on the tennis court, running cross country, or in the classroom as a member of the National Honor Society. Artistic and creative, she was rarely in need of inspiration for her designs and watercolor and acrylic creations. When she wore shoes from two different pairs at the same time, she would leave others wondering what new trend they were missing out on rather than if she knew what she was doing. Whether as a high school homecoming queen nominee or as a TriDelt at her alma mater, others were drawn to her sparkle.

It is a shared belief among most religions that humans are not up to the job, that left to our own devices we are broken, imperfect, and inadequate. In the lyrics of American saint Willie Nelson, “I may not be normal, but nobody is.”  It is no coincidence that we live in political climate in which the only thing we all still agree on is that the other side’s candidate is incompetent, a moral failure, and far too irrational to lead us.

No matter how much brokenness and loss we see around us, the loss of life in today’s circumstances can make for a poison that is toxic to our happiness, mixing feelings of grief, guilt, anger, shame, relief for the end of another’s suffering, guilt for feeling relief, and incessant voices in our heads demanding to know “Why didn’t you…”, “What if we had…”, “If only someone…”, and “Why me…why us…why her?”

We cannot go back. The little man in our head that would try to take us backward to re-live, to ask what if, and why not–he is a liar and has no solutions or answers to offer. It’s ok to tell him to shut up.

What about God? Those who give God credit for all the good in their lives at times like these naturally may blame God for the heartache as well. Whether one follows the God of the Old Testament–who still considered David his favorite in spite of their arguments–or the God of the New Testament who withstood Jesus’ doubts and second-guessing in the Garden of Gethsemane, your God can take it.

You would not be the first to question, to doubt, even to curse God, and certainly not the last. Millions have before and millions will in the future, without any likelihood that God is surprised that people in loss are so angry and without any risk that God is going to run away to avoid having to hear it.

Others who do not view the world through the lens of a Creator God may be equally disenchanted and disheartened, but have no direction in which to channel their anger. They may despair that “it is what it is.” That there is no better way, no better place, no room for grace…

As we grieve the loss of Cindy today, look around. Someone else here may be the next person taken from us sooner than we planned, sooner than expected, before we have had time to say the healing things we wanted to say, to put petty slights behind us and move forward.

In the end–whether a believer, agnostic, or atheist–it is all we really can do: look forward. Taking with us the memories that are happy, but leaving in this place all second-guessing. Whether of ourselves or others.

When the little man in our head begs us to follow him back down the perilous path of what might have been, tell him simply, “It is finished.”

Our time on this planet is a limited one and it grows more limited by the minute.

As British saints Paul and John cautioned us in their lyrics, “Life is very short and there’s no time for fussing and fighting my friend.” All we can do and what we must do is channel our grief, our anger, and all the other emotions, into creating more love among those that remain.

Find a friend or family member with whom we nurse some grudge or bear some resentment, or whose Facebook posts drive us absolutely insane, and nonetheless choose to love them and be loved by them. In all our glorious imperfection.

It drives that despicable little man in our head absolutely crazy. Which is ok.

God is our hope and strength, a very present help in trouble.  Therefore will we not fear, though the earth be moved, and though the hills be carried into the midst of the sea;

Though the waters thereof rage and swell,  and though the mountains shake at the tempest of the same.

There is a river, the streams whereof make glad the city of God, the holy place of the tabernacle of the Most Highest. God is in the midst of her, therefore shall she not be removed; God shall help her, and that right early.

The LORD of hosts is with us; the God of Jacob is our refuge.

GOD, whose days are without end, we are reminded of the shortness and uncertainty of life, deeply grieved by the loss of dear, precious Cindy.

We are angry that we have lost her so soon, at how much she suffered, and fear we will be forever scarred by our helplessness in the face of it all.

Grant us and Cindy that peace and rest that so often has escaped us. Rescue us from the might-have-beens, the should haves, and what ifs that threaten to entangle us and keep us drowned in grief.

Give us the strength to tell that detestable naysayer in the back of our brains to sit down and shut up.

Perhaps most difficult of all, we ask your assistance in turning our swords into plowshares, in fashioning grief that is a lump of coal, or worse, into a diamond–of greater love and friendship for those of us who remain.

Give us the humility and strength to embrace those around us with all the faults we know all too well they have, in the hope that friends and family can likewise hold their noses and embrace us in spite of what failed, unreliable, quirky, and impatient creatures they know us to be.

God of mercies and giver of comfort: deal graciously, we pray, with all those who mourn, that casting every care on you, they may know the consolation of your love.

Show us light in this great darkness, lead us to hope though we may swear that none exists, and grant us the peace that passes understanding that we may share it with others suffering around us. 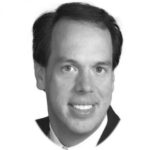 David Schleicher is an attorney who lives in Waco.