Local arts scene makes us unique and fun to visit!

Waco recently received a Cultural Arts District designation from the State of Texas. To many, it is a great thing. To others it is too esoteric, elitist, and a waste of “their” money.

Let me share a brief story as to why I think it IS a big deal and is deserving of support and nurture, why it brings value to all citizens.   My wife is originally from Springfield, Illinois. Her family is still there. I will have to say that over much of the thirty-six years she and I have been married, Springfield, especially being the capital of a state as significant as Illinois, wasn’t much of a place to visit multiple times. There didn’t seem to be much to do once one had done all the obvious Lincoln sites. But for a number of the nearly thirty-four years I have lived in Waco, Springfield had one thing that Waco did not have: a certain department store that shall remain nameless. I really liked the merchandise selection, and the prices, especially sale prices. That gave me something to look forward to when we visited.

Well, in the intervening years, the same department store came to Waco—so much for an incentive to visit Springfield other than visiting in-laws of course. Now, having the same store close to home takes some of the shine off the experience of shopping there. Convenience breeds complacency. This is something I have heard referred to as the “Six Flags effect” which says that if one lives very near Six Flags, it really isn’t a big deal. Even the Bible gives an example in the story of the prophet in his own hometown.

So what does this have to do with the Waco Cultural Arts designation? Large corporations have edged out the mom and pop shops and other small businesses in cities and small towns throughout the country, including Waco. Cities and towns have come to look more and more alike, with the same retailers and restaurants, with the same logo-branded clothing, with the same architecture-as-logo buildings, the same non-descript metal buildings built for economy over aesthetics or style.  One remaining unique characteristic that can and does make one community different from others is its local arts scene including, visual and performing arts, music, regional architecture, cultural and historic museums.

Anyone can participate in the arts at whatever level they desire or that their talents or interests allow, whether as artists or performers themselves, as aficionados, collectors, or just as observers or browsers. It isn’t required that one be a Sinatra, or Celine Dion, Madonna, Johnny Cash, Picasso, Whistler, John Wayne, or Meg Ryan, or a Gugenheim level collector. In fact, the broad spectrum of taste, talent and style found in each community adds to its unique artistic nature.

Because tourism is to some degree or other such a vital part of the economy of every town or city, it only makes sense for those communities to make the most of what makes that town or city unique and worth visiting, that make it different from another, even unique. That uniqueness thrives in the local arts scenes. Take Taos, Miami, or New York, for example. Even the nearby small town of Clifton, Texas, benefits greatly from its local arts scene. It is hard to deny that the arts, as a part of Clifton’s economy, far outpaces not only other communities its size, but also that of larger towns and cities. Granbury is another small town example. The citizens and merchants there stage arts and crafts events many times a year drawing substantial numbers of visitors. The more local citizens participate in their own local arts scene, the more they desire to do so in other communities as well, therefore becoming arts tourists and possibly even aficionados.

Now that Waco is a designated Cultural Arts District, it is up to the Waco citizens not only to capitalize on the designation, but also to participate as fully as possible for their own enjoyment. Festivals take effort, volunteers, support, leadership, planning, financing, promotion, and local participation to grow to the point of attracting the attention of those who would travel to Waco to participate. Volunteers or even visitors don’t have to love the arts, just love Waco and want to have a part in its future. And if nothing else, arts events, businesses, and institutions need audiences. It takes solid local audiences to help build the critical mass for others to travel to these events. That is something every citizen can do. They can attend and they can spread the word. Don’t assume because an event is close to home that it can’t be quality.

Kudos to Fiona Bond, Chris McGowan, Megan Henderson, Doreen Ravenscroft, Baylor, MCC, The Waco Art Center, and countless others for all they have done to bring the Cultural Arts District designation about. We have a great start due to the vision, hard work, and dedication of those community leaders mentioned earlier and many others. Anything that benefits the economy, that benefits even a part of a community benefits all citizens of the community. So, let’s go Waco. 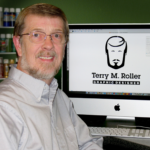 Terry Roller, Prof. Emeritus of Graphic Design, came to Waco after teaching at Eastern Illinois University to take a similar position at Baylor University in 1983. He retired from Baylor after 33 years this August. He has also been a partner and performer in the Stars Over Texas Jamboree, a first-Thursday-of-the-month, Branson-type musical stage show at the Lee Lockwood Library and Museum since its inception in 2010. His wife Janet teaches second grade at Waco Charter school where she also teaches a weekly art class for several grades. They have one daughter, Lauren, who works for Magnolia in public relations.