(Have you ever been a part of a conversation where you just nodded and pretended you knew what was going on, when really you had no idea what people were talking about?  If you do this long enough, you eventually get to the point that it’s embarrassing to ask, and you just make peace with stumbling along in ignorance.  I know this from personal experience! For example, even though I think of myself as a fairly well informed citizen of Waco there are still some basic things about how the city works that I only vaguely understand. And – even though it probably only takes 5 minutes to Google it – I just never get around to it.

Assuming that I’m not the only one out there with this particular character flaw, Act Locally Waco is starting a blog series called “Waco 101.”  The idea will be to use a blog post every now and then to explain some aspect of how the city works – maybe some term or process you read about in the paper all the time, but don’t really understand.  It’s for those of us who want to be informed citizens, but are just too dang busy (or lazy!) to look stuff up.  Do you have ideas for topics for this series?  If so, send me an email at [email protected] and we’ll try to find someone to write about it.  No one needs to know it was you who asked!  Thanks!  — ABT)

If you have ever read an article in the Trib about downtown Waco, you have probably come across the acronym “TIF,” as in…

Tax Increment Financing (TIF) is a way for the city to encourage development in an economically distressed area by investing tax revenues.  The basic idea is that there are certain areas in the city that would be beneficial to develop, but, to be frank, they are in such bad shape that it is difficult to entice investors to take the plunge.  To help with this dilemma, the City of Waco can encourage investment by agreeing to pay some of the cost of the development.  But, where would the money come from to do that you ask?  Enter TIF!

The basic concept of TIF is that a distressed property has a certain original value that generates some amount of tax dollars. After it is renovated, it will have a new, higher value that will generate more tax dollars. This difference in the amount of taxes paid is the “increment” in Tax Increment Financing.  The Tax Increment Financing model uses this projected increment to finance improvement projects.

Here’s how it works:

The city identifies a particular area that is economically distressed, but has potential for profitable development. This area is designated as a “TIF zone” for up to forty years.  For example, in 1982 the City of Waco established “Reinvestment Zone #1,” which includes part of downtown and a large part of the river front (map). That area is designated a TIF zone until 2022.

TIF funds can be used for variety improvements: affordable housing, transit facilities, demolishing a building, or preserving the façade of a building, among others.  (Here’s the link to the city’s TIF Guidelines.)

Developers who are interested in investing in the TIF zone can ask for TIF funding to help with eligible parts of their projects.  This reduces the developer’s expenses and helps encourage renovation in the zone.   When the renovation is complete, the property is more valuable, which results in higher property taxes, which replenishes the TIF fund.

Developers who are interested in receiving this kind of funding start the process by checking with the City Manager’s office to see what parts, if any, of their projects are eligible for TIF funding. If some parts are eligible, the developer may submit an application for formal consideration of funding.

If the City Council does accept the proposal, the city enters into a contract with the developer to reimburse the agreed upon TIF-eligible work.

This reimbursement might happen in any one of several ways, for example:

This model of funding has been used to help incentivize all kinds of downtown Waco development projects from the MLK Pedestrian/Bike Trail, to the American Football Coaches Association parking lot to – more famously –  parts of the McLane Stadium project and The Magnolia Silos project.   The most recent big TIF commitment is for the “Brazos Promenade” riverfront development scheduled to break ground in 2017.

Clearly this model of funding has had a huge impact on Waco especially in downtown.  It will be interesting to see what the future holds between now and 2022 when TIF zone #1 reverts back to the regular tax rolls! 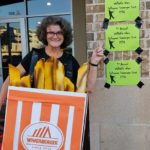