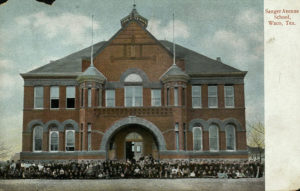 A 1903 bond election resulted in the construction of three nearly identical schools. Sanger Avenue School, designed by renowned Waco architect Milton W. Scott, long outlasted its counterparts Bell’s Hill and Brook Avenue Elementary Schools. The two-storied building featured unique architecture and elaborate design, including ornate arches, a rotunda, an upstairs auditorium, and a high roof crowned by a cupola. The building’s heavily Romanesque style included arched windows and doors framed by limestone. Prominently featured turrets stood at the front of the original school building but were removed in a 1930 renovation. 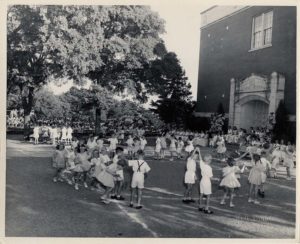 Sanger Avenue School opened in 1904 with John H. Richardson as its first principal. Former students and teachers generally agree that the most influential figure in the history of Sanger Avenue was likely Nina Glass, the school’s second principal. Glass encouraged parents and students to take an active role in education, establishing a mimeographed newsletter for parents called the Ginger Jar and inviting students to save coupons to buy pictures for the school. She published a nationally used arithmetic textbook and frequently attended educational conferences. Well liked by both staff and students, Glass was often seen at the school’s annual May Fete festival, brightly garbed and leading students in a parade around the Maypole.

The years following Glass’s retirement from Sanger Avenue brought great changes for the small elementary school. By the 1960s, over seven hundred students attended the school, and music classes and a choir were established. Yet the Waco Independent School District (WISD) announced plans for the school’s closure as a part of a busing plan to meet a federal desegregation order. By the 1970s, African American students made up approximately half of the school’s population. Despite the efforts of many to keep the school open, classes ceased at Sanger Avenue in 1974.

Although a portion of the school briefly housed a Head Start program, much of the building soon suffered from years of disuse. Disappointed at seeing such an important piece of Waco’s history sit vacant, Waco attorneys LaNelle and John McNamara purchased the school for $80,000 from WISD. The couple renovated the building, installing a new roof, boarding up broken windows, and removing asbestos. Yet despite their hopes of repurposing the building, perhaps as a charter school, the plans never came through. Another blow was dealt to the historic building when arsonists set fire to it in 2008.

The city of Waco deemed the building unsafe, and in 2010 bulldozers tore the remnants of the structure down, leaving only the entrance archway standing.  The school’s former location has been featured in the Waco Trib recently as a possible location for an indoor soccer field.

Waco History is a mobile app and web platform that places the past at your fingertips! It incorporates maps, text, images, video, and oral histories to provide individuals and groups a dynamic and place-based tool to navigate the diverse and rich history of Waco and McLennan County. It is brought to you by the Institute for Oral History and Texas Collection at Baylor University.  This post: Prisca Bird, “Lovers’ Leap,” Waco History, accessed June 21, 2017, http://www.wacohistory.org/items/show/38.