A year ago at Christmas time in our city, a young family with a tiny infant was suddenly homeless. When the baby’s father requested help at a local emergency shelter, he was told that Mom and Dad were welcome, but their baby would have to be placed somewhere else. When they called an 800 number for assistance, they were told that the only emergency family shelter in Central Texas was Sally’s House. Majors Anita and Brad Caldwell of the Waco Salvation Army remember that the young mother wanted only one Christmas gift—a plastic baby bathtub—because every time she bathed her little boy in a gas station sink, he hit his head on the hard metal faucet.

Sally’s House is vital to the community because it is the only emergency shelter specific for families with children in McLennan County. And, Sally’s House needs the help of the community because its federal funding has been cut. In 2015/2016 the federal government’s emphasis changed from shelter assistance funds to rapid rehousing. Although rapid rehousing of the homeless is a worthy goal, families in crisis will always need short-term emergency accommodations until other options become available. 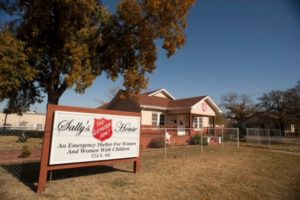 So for those who are unfamiliar with Sally’s House, what does the place look like? The small house is attractive, thanks to students from Live Oak Classical School who have spent hours this year repainting the exterior fences and sidewalk. The house itself is modest, with three bedrooms and bathroom facilities for families, one bedroom with bunkbeds for single women, two cots in the hallway, and a small area off the hallway for washers and dryers. A Salvation Army staff person is always on duty to safeguard the families at night. Professional case managers work directly with residents to provide budgeting, life skills, and other needed resources and assistance to focus on long-term solutions.  Daily breakfast and a hot evening meal are provided at the Salvation Army Community Kitchen. Within 30 days, most families are transitioned to apartments.

Last year 172 women with children, families, and single women stayed at Sally’s House. Too often all the beds–plus the cots in the hallway–are full, which means desperate families have to be turned away. Many of the moms, dads, and children no doubt spend nights in their cars or on the street unwilling to have the family split up among other shelters.

Because sometimes there truly is no room at the inn, the dream of the Waco Salvation Army Women’s Auxiliary, a group of local women who support Salvation Army ministries, is not only to sustain Sally’s House as it is now, but also to eventually build a much larger facility.

Won’t you, Waco and McLennan County residents, help us provide consistent help to homeless children and families? The Women’s Auxiliary of the Salvation Army is holding a fundraising event, “Repurpose for a Purpose,” where everything old is made new again. Waco’s best professional and amateur designers have contributed their finest work — repurposed furniture, household items, clothing, and art – to be auctioned off to the highest bidder. All proceeds benefit Sally’s House. We invite you to enjoy this special evening of fun, fabulous food, and incredible finds!  For tickets and more information, visit www.SalvationArmyWaco.org/repurpose or call (254) 756-7271. 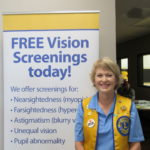 Louise Powell is currently an adjunct English instructor at Baylor and MCC. Previously she was an English teacher and administrator in Waco I.S.D. She is married, the mother of three grown children and grandmother to seven. Louise is a member and secretary for the Women’s Auxiliary of the Salvation Army and a past president of Waco Founder Lions Club, for which she currently serves as Vision Screening Chair.