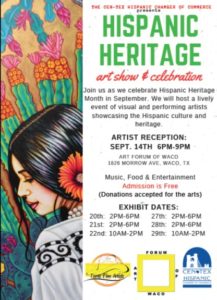 Latino heritage and culture. Friday night, September 14, the Centex Hispanic Chamber of Commerce and the Texas Fine Artists group are hosting a Hispanic Heritage Art show and Celebration.  The event will include performances by El Folklorico las Estrellas de Waco and Mariachi Azteca de Waco among others, and one particularly special guest… Vann deCordova.

If you are familiar with Waco history, you will recognize the name “deCordova.” Vann deCordova is the third great grandson of Jacob de Cordova.  Jacob deCordova was one of the founding fathers of Waco.  He was a man of warmth and he had strong friendships with other founding fathers of the city – men whose names you may also recognize such as Neil McLennan, Jr., George B. Erath, and Captain Shapley P. Ross.

Here is a little of his story.

Jacob deCordova was born in Spanish Town, Jamaica, near Kingston.  His parents were British Jews of Spanish descent. He moved to the United States in his late twenties and, among several other endeavors, he became a successful land agent.  Through scrip and direct purchase, deCordova acquired large amounts of land to sell to settlers.  At his peak, he owned and/or controlled over 1,000,000 acres of Texas land. To attract settlers to Texas, he made speeches about Texas in London, England, New York, Philadelphia and other U.S. cities.  His lectures were published on both sides of the Atlantic and were widely read. 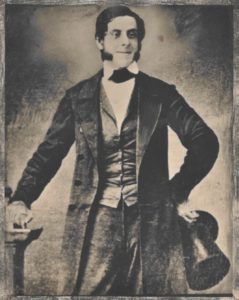 In the mid 1840’s, deCordova was engaged to divide and sell the land on the banks of the Brazos that would eventually become Waco.  He hired his friend George Erath to work with him on the project. George B. Erath was a surveyor by trade and did occasional work for deCordova.  They had a mutual respect for each other.  Erath was deCordova’s most respected surveyor, and George often referred to Jacob as “The Big Man.” Upon seeing the land they had been hired to sell, they agreed that it would make a great location for the city.  DeCordova procured the title to the land himself, thend he, Erath, and two other men set about staking out the town on March 1, 1849. Town lots of 1 acre sold for $5 and nearby farmland brought $2-$3 an acre.

When McLennan County was established in 1850, deCordova successfully lobbied for Waco to become the county seat.  He sweetened his case by donating roads and tracts for public use.  He also recruited prominent Texans to move to the town.  One of his most successful recruits was Captain Shapley P. Ross of the Texas Rangers.  DeCordova lured Shapley from Austin with the promise of business concessions (Ross was given a monopoly on running the only ferry across the Brazos) and several free tracts of land.   Jacob deCordova was quoted saying, “Waco was the most beautiful location for a city in all of Texas.”  “Most of all,” he said of the future community, “she will be my daughter, and a beautiful daughter she will be.”

In the 1840s, deCordova resided in Houston and helped create the Houston Chamber of Commerce.  He also served as an alderman on the early Houston City Council. In 1847, deCordova was elected a state representative from Harris County to the Second Texas Legislature.

In 1849, deCordova and Robert Creuzbaur compiled and published one of the first definitive maps of Texas, a map Sam Houston praised on the floor of the US Senate. Today, the map is registered in the US Library of Congress and is highly praised by scholars and sought by collectors. In 1856, de Cordova published the “Texas Immigrant and Traveler’s Guide Book” to provide complete information for potential settlers.  He printed and distributed more than 50,000 copies. Some scholars have credited deCordova with being responsible for bringing more settlers to Texas than Stephen F. Austin.  Yet, sadly he gains almost no attention in contemporary Texas history school books.

We are looking forward to hearing a bit more of Jacob deCordova’s story from Vann deCordova Friday night.  Hope to see you there! 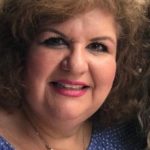 Monica Shannon’s leadership in arts has been instrumental in the developing and emerging presence for the visual arts in Central Texas. Monica has worked with over 100 artists and continues to work in the newly designated Cultural Arts District in downtown Waco. Monica loves travel, but mostly in helping people achieve their goals.