I often hear people ask (and personally wonder) why downtown Waco does not have its own organic grocery store.

In 2016, I attended a Baylor Continuing Ed course called “Waco 101.”  In that course I learned that these stores invest in locations with higher density of downtown populations than we have right now. Ashley Bean Thornton, one of our instructors who hosted the course, challenged us near the end of class to fully invest in downtown, including through our finances. To care for and support downtown means to choose to spend time, energy, and money downtown.

We left that course with a challenge to see how we could move from just wishing Waco would develop into the place we would like to live in into making the changes we hoped to see.

Since the course, my husband and I have officially moved downtown. Five years ago, we would have never considered living downtown. But here we are – all in – as we move to the next step in caring for our downtown by seeking to launch our business – Waco Cha. Waco Cha has been on our hearts and is an overflow of our desire to build community and hospitality in our city. We are excited to start our tea stand later this month at the Waco Downtown Farmer’s Market! Be on the lookout for the newest kids on the block!

“Cha” is the Chinese word for “tea.” At Waco Cha that you will find authentic Taiwanese-inspired tea drinks such as classic bubble milk tea made from local milk, passion fruit green tea, amongst other fruit tea flavors. Dairy free options will also be available. Eventually we hope to start selling dumplings, Chinese-inspired rice bowls, and other side dishes.

What started out as a few ideas to better our community has grown into an upcoming business launch.

I leave you with the same challenge Ashley left us at the end of Waco 101 – What are ways YOU can spend more time, energy, or money towards advancing the causes of downtown Waco?

Is it through having date nights downtown on a First Friday? Or supporting our local farmers and vendors at the farmer’s market? Or perhaps even moving downtown like we did? And to my fellow entrepreneurs – perhaps taking that step in seeing what comes next in order to launch your creative ideas?

How do we – collectively – make Waco into the city we desire it to be? Join us in being downtown dwellers. 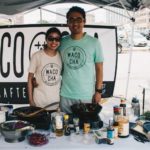 Jaja Chen is a social worker/private practice therapist by day at Enrichment Training & Counseling Solutions. Her hobbies include making kombucha, practicing yoga, and helping to market Waco Cha. Chef Devin Li is an engineering teacher by day and a self-taught chef, entrepreneur, and the creative mind behind Waco Cha. More about Waco Cha can be found on Facebook https://www.facebook.com/WacoCha1/ and Waco Cha’s Instagram page here https://www.instagram.com/waco_cha/