But Some of Us are Brave: DeShauna Hollie

As I sat down to write about this theme of “But Some of Us Are Brave”, I thought of my favorite “super hero” Septima Poinsette Clark. Septima lived from 1898 to 1987. She was born in Charleston, South Carolina and lived much of her life there. Although Septima lived until she was 89, and is considered by many as the grandmother of the civil rights movement, her story isn’t as widely known as those of other civil rights leaders.

As a teacher and avid civil rights activist, Septima helped pioneer some important aspects of the civil rights movement. She helped to create Citizenship Schools that addressed the barriers and unjust laws that African Americans faced when it came to registering to vote in the South. These laws varied by county and state, but many required African-American voters to be able to pass a literacy test in order to vote unless their grandfather had voted in a previous election. This disqualified most Blacks in the South, because their grandfathers had been slaves and barred from voting. Activists like Septima found ways to address these laws while at the same time protesting them. 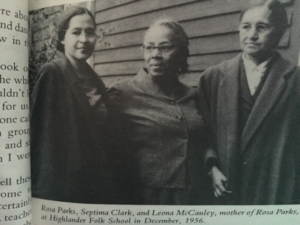 Septima also worked with Myles Horton of the Highlander Folk School in Monteagle, TN to train other civil rights leaders and activists in non-violent civil disobedience. Rosa Parks attended one of those trainings and gatherings. Rosa went on to help lead the Montgomery bus boycott a few months later.

Septima used her training and passion as an educator to fight against systemic racism in the South. She consistently spoke up for the rights of marginalized people and continued to speak out even when her life was threatened, even when she was fired from her job as teacher for being a member of the NAACP, even when she was thrown in jail for holding integrated meetings with Whites and Blacks, and even when she was ostracized by many members in her community for using her voice to help others. She is indeed a super hero. In her later years, when asked about her work and contribution to the civil rights movement, she replied, “I don’t expect to see a utopia. No, I think there will always be something that you’re going to work on always. That’s why when we have chaos and people say, ‘I’m scared. I’m scared. I’m concerned,’ I say, ‘Out of that will come something good.’ It will too. They can be afraid of what is going to happen. Things will happen and things will change. The only thing that is really worthwhile is change. It’s coming.” (Clark, pg126) 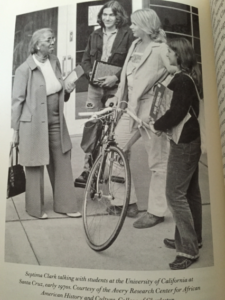 Septima chose to continue working towards change her entire life, despite the consequences. Another quote of hers that I love goes: “It’s not that you grow old, but it is how you have grown old. I feel that I have grown old with dreams that I want to come true, and that I have grown old believing there is always a beautiful lining to that cloud that overshadows things. I have great belief in the fact that whenever there is chaos, it creates wonderful thinking. I consider chaos a gift, and this has come during my old age.” (Clark pg124)

Septima Clark is an inspiration to me and what I want my life to be like. I want to work for what I believe in my entire life. I want to work towards a more accepting society, a society that acknowledges that we are not a utopia. We have come pretty far since the days of slavery and segregation but the journey continues.

There is an elephant in the room that we are so afraid to mention. We are afraid and concerned that we may say something offensive, that we may hurt each other. The protests sparked by the shooting of Michael Brown on August 9th in Ferguson, MO, prompted questions in my mind about what I could do to stand in solidarity with that community and with others in my own community of Waco, TX, as we all grieved over the loss of a life. I’m not sure why this particular event spoke to me in a way that other shootings had not, but it made me want to take to the streets and scream “Black Lives Matter” and “Enough is Enough” along with other protesters. I love a good protest. They are invigorating and a great way to let off steam so that I can get down to the business of figuring out how to bring about the change that I am screaming about. Septima’s model of continual work and non-violence remind me that there is always a positive way to go about change.

The anger is real. The despair is real. The hurt is real. I believe it is time we made the conversation real. Although we are not Ferguson, MO,and are in Waco, TX, we have our own history of racism, prejudice and discrimination that is very real. I want Waco to prosper and I want to continue to work towards positive change in Waco. Will you join me in the conversation?

I know that conversations about change, about injustice, about past hurts and about how we move forward can sometimes be scary and hard. But dialogue with each other is the first action that we can take in being allies to each other. 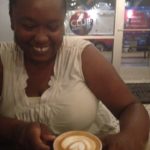 (Visited 24 times, 1 visits today)
Posted in But some of us are brave..., Race & Ethnicity, Waco's Black Community