She Did it Anyway : A Birth Story

One Friday evening late in May 2009, I ventured to a place I had never been before, yet a place I had known for years: Tia Chucha’s Centro Cultural. This independent bookstore and non-profit community center for arts and culture is nestled in the foothills of the San Gabriel Mountains in California. Intentionally planted in the heart of an area known for steel mills, gang violence, and the pornography industry, Tia Chucha’s is a catalyst for revolutionary healing and urban transformation, “where art and minds meet, for a change.” 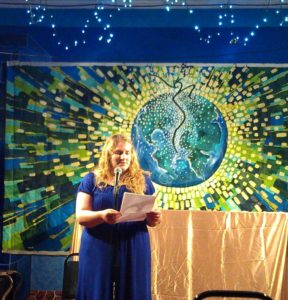 I came for open mic and found limitless wealth of community, creativity, and inspiration. I also began to notice the imbalance of voices. While there were many womyn in attendance each week, not very many of them stepped up to the mic. I was curious. Many womyn shared with me about how they wrote, yet, they never read aloud. Ever.

Some told me they were shy. Others anxious. Some confided that they didn’t feel welcome at the mic. We talked about what it might be like to have a gathering of womyn writers, to build courage and confidence together.

In the fall of 2009, I offered the suggestion to several of the Centro staff, Stacy, Karina, and Luz as well as the Director of Operations and co-founder, Trini. They loved the idea and asked when I would like to start it. I laughed, clarifying that I did not want to lead it, I just wanted to attend. I thought someone else should lead it. Someone legit. I mean, I wasn’t even published. I had never taken a class on writing. I didn’t know anything. I just rambled on the page and sometimes it came out as poetry. I didn’t even call myself a writer or poet then. No. No way. I was definitely not qualified. With a gentle guiding hand on my shoulder, Trini said, “we have a belief here at the centro, that if someone comes to us with a vision for something, then it is intended for them to accomplish. Take your time, and when you are ready, we are here and will support you all the way.” This was one of the top three transformative moments of my life. 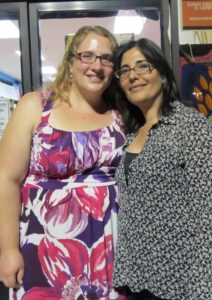 I pondered the weight and wisdom of Trini’s words all the way home. I wrestled with doubt, insecurities, and fears over the next four weeks until I came to a liberating and joyful conclusion: none of us need someone to tell us how or what to write. What we need is space held for our becoming. We needed to gather in a circle to teach and learn from each other. We didn’t need red pen massacres on our pages. We didn’t need others’ authority over our work, our words. We needed the chance to claim authority over our own truths. We needed to, “give sound to our story and volume to our voice.”

So I created a proposal. Settled on a name. Bought a domain name (then learned how to build a website). I went back to Trini and with a quiver in my voice I said, “I’m in!” On January 15, 2010 In the Words of Womyn writing circle met for the very first time. Strategically scheduled right before open mic on Fridays, my hope was that as we wrote and shared and grew in our identities as writers, we would also show up en masse to read, perform, and cheer one another on at open mic. And that is exactly what happened! 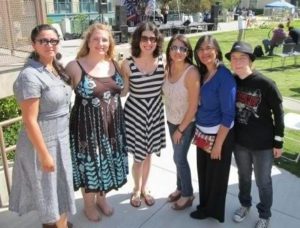 ITWOW poets gather to perform at the Annual Celebrating Words Festival at LA Mission College, May 2012

I haven’t quite found the words to articulate the singular joy that is witnessing a woman finding her voice, standing up, and speaking her truth for the very first time. All these years later, many of the womyn who began in ITWOW with shaking voices and trembling hearts are now hosting their own open mic venues and writing circles. They are celebrating publications, compiling and editing anthologies, and featuring at venues far and wide. I look on in awe and wonder, overflowing with pride and joy and profound respect for each of my sisters. 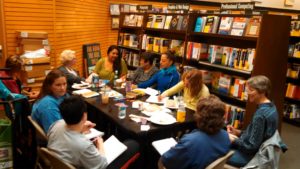 When I moved from Los Angeles to Texas in 2012, it was my deepest hope that ITWOW would continue at Tia Chucha’s and that I would have an opportunity to gather a circle of womyn in Waco. To my eternal joy, Alex Hohmann stepped up to carry on the vision of ITWOW~San Fernando Valley. In 2013, In the Words of Womyn~Heart of Texas launched. We met weekly on Mondays first at Croft Art Gallery, then at Barnes & Noble. In 2015 the circle will begin on Monday, February 2, at the Art Forum of Waco. 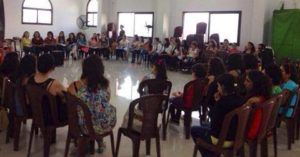 In the Words of Womyn~Lebanon 2014 (photo credit: Nagham Wehbe)

Earlier in 2014 Nagham Wehbe, a writer, activist, and film-maker from the ITWOW~SFV circle approached me with a proposal about beginning a circle chapter overseas in her home place of Lebanon. I was elated! From the beginning, my dream was that ITWOW would become a global project with organic circles popping up everywhere womyn gather from schools to prisons, community centers to front porches, book stores to employee break rooms. In the summer of 2014 a staggering 70 womyn of all ages attended the kick-off of ITWOW-Lebanon!

This year ITWOW celebrates its fifth birthday. What these five years have taught me is that when I go boldly into that which overwhelms or intimidates me, I find extraordinary treasure in my own becoming.  It is my utmost joy to do this work. 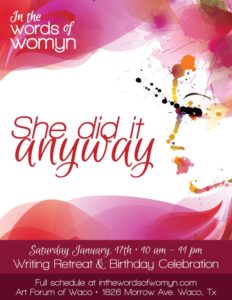 Come celebrate with us January 17, 2015. Attend the “She did it anyway” Womyn’s Writing Retreat from 10a-5pm. The retreat will be followed by evening events open to the public. (Full schedule available online). We all have a story to tell, and when we are given permission to take up space, to turn up our volume, we find immeasurable beauty in the reflection shining back at us from our pages. 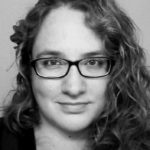 Jenuine Poetess is an artist, visionary, and community organizer. In 2010, she founded In the Words of Womyn (ITWOW), an international, grass-roots, written and spoken-word arts project with chapters throughout Los Angeles; Waco, TX; and Lebanon. ITWOW empowers womyn of all ages to give sound to our story and volume to our voice. HOT~ITWOW writing circle meets Mondays from 6-7:45pm at the Art Forum of Waco beginning February 2, 2015.  Jenuine also founded Waco Poets Society which sponsors a local open mic venue in Sanger Heights.  Meeting every 2nd & 4th Saturday at the Art Forum of Waco Nuestra Voz Open Mic invites community to share poems, songs, stories, spoken-word, and other creative expressions! You can contact her at: [email protected].