But Some of Us are Brave: Shamethia Webb

A Bad Day – By Shamethia Webb

She was having a bad day.

And what exacerbated it was the fact that it wasn’t unusual.

She awoke on time (which meant early for her). Showered. Brushed her teeth. Scowled at herself in the mirror. And went to work.

All of her co-workers were talking about the black boy who was murdered while walking from a convenience store. They’d been talking about it for days. Talking about it and doing nothing. The same words again and again as if the incessant movement of their mouths negated a seventeen year old corpse.

During her break she washed and rewashed her hands in the restroom. She abhorred being in the ladies room for longer than a few minutes. It smelled like women. Which meant it smelled like pain and fatigue.

She wrenched a paper towel out of the dispenser and cast a frown at the vacant stalls that seemed to mock her loneliness.

She didn’t speak during staff meeting. Didn’t see the point in disturbing her tongue. They always smiled over her suggestions. Or tasted her words with their mouths before spitting them out. It infuriated her. Mostly it hollowed her. Cleaved into her like a perforated knife and emptied her out.

She’d spilled so much of herself over these hallways during her tenure here. Specks of herself all over the walls. Now a permanent grimace clung to her face like love.

The smell of coffee hung in the air. Stale. A room full of spit and disdain. She inhaled. Yes, disdain. She could smell it on them like second skin.

They were talking about him again. Her boss didn’t use the word murder. But defense. And mistake. And misunderstanding.

Her co-worker, the one with a frown for a smile, giggled at her boss’s comment that the black boy should have ducked the bullets.

I thought black boys were fast, he joked. A room full of laughter.

She died a little bit.

She stumbled to her car, trembling in her black woman fury.

In the checkout line at the supermarket, she watched as her few items moved lazily up the conveyor belt. The cashier chatted animatedly with the customer in front of her.

Don’t let this cashier cut her eyes at me, she thought to herself. Not today.

Don’t let her reach for my money with two fingers as if she’s afraid of skin contact. Don’t let her suddenly become mute and unresponsive to my presence, to my human being-ness. Don’t let her. Not today.

She realized with some panic that it wasn’t anger that fueled her thoughts but despair. She recognized that if the cashier did de-humanize her today she wouldn’t respond with fury but with resignation.

The passivity worried her.

I’m dying too fast, she thought.

She tensed as her items moved closer to the cashier, and she couldn’t help but notice that the murdered boy’s eyes stared back from every magazine in the aisle.

The repetition overwhelmed her. She shook.

Pieces of herself broke off. Landed dully on the laminate floor.

She tried to catch herself but her hands were already gone. Dead.

A voice behind her.

She opened her eyes. When had she closed them?

A white man behind her scowled at a TV guide featuring frozen celebrities. He turned a full smile on her. The white of his teeth blinding for a moment.

She managed a nod.

I’d rather read the back of a cereal box than watch TV, the man said.

He picked up one of his boxes of cereal and waved it at her.

This isn’t food but entertainment.

She smiled. Not a full one (she was incapable of that at this point) but a slash of the mouth that surprised her with its suddenness.

And there was a glimmer inside of her. Something not quite dead, that stirred.

The cashier was aloof but polite. And that was enough.

She walked to her car without the usual trembling.

The white man (No, man, she corrected) was parked beside her. They chatted as they loaded their items into their cars.

Well, he chatted. She managed to listen without the usual weariness and rage.

Perhaps she would sleep in tomorrow.

Perhaps she would grow again.

And as she slid into her driver’s seat, a murmur of a smile across her face, the man waved a crumbled bill in her face and propositioned her for sex. 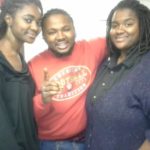 Shamethia Webb (on the right in the picture) is the Regional Director of the Texas Hunger Initiative Waco Regional Office. She grew up in Waco and spends her free time writing, dreaming, and trying to protect her reign as Connect Four Champion from her nephews. Hip hop music, sour candy, and Toni Morrison novels are a few of her favorite things.

(Visited 27 times, 1 visits today)
Posted in But some of us are brave..., Race & Ethnicity, Waco's Black Community