But Some of Us are Brave: Baltazar Acevedo y Arispe, Jr.

And here we go again. Ferguson and its aftermath have sparked renewed interest, debate and introspection of how we Americans act against each other in a destructive manner.

The president is anguished and demonstrates his consternation by appointing another taskforce to solve the problems that are rooted beyond the grasp of Washington. Yes, $75 million will solve all ills. Local political leaders waver and walk the fence in distress, as they are afraid to address this most volatile issue. As a nation we again look at the aftermath of the Civil Rights Era and find that not much has really changed. The only change is that racism is now practiced in more subtle and sophisticated ways.

By every measure of social advancement, the poor have become poorer, the homeless remain without a home, and the illiterate have become more illiterate, the economic and politically disenfranchised remain so. Women continue to suffer neglect, not only in abusive relationships but also in their economic well being as they continue to earn at least 35 percent less than their male counterparts for the same labor. These are the seed that sow the roots that nurture racism and its exclusionary nature.

Racism, at its core, is about exclusion, pure and simple. It is about leaders who are afraid to come face-to-face with the shifting demographics and the fact that ethnic America is just over the horizon. As one who was involved in the Civil Rights Movement and worked with Cesar Chavez in our struggles to expand the rights of Chicano farm workers, I know racism. I see it daily; it has its own scent and its own taste and it can be touched as it meanders within communities, its school districts, civic organizations, its congregations and its institutions of higher education. It has become so pervasive that it permeates the actions of policy brokers who fail to see it or simply ignore it as they continue with their disenfranchisement of those at the lower rungs of the social ladder. I also see its aftermath in the homeless shelters, food banks, its community kitchens, centers for abused women and community based agencies that work daily to stem the tide of poverty and the sense of hopelessness of those that wander the streets searching for a lost future.

As Bob Dylan’s lyrics remind us, “you do not need a weatherman to tell which way the wind the blows.” The wind still blows with the essence of racism and once in a while the tip of the volcano explodes and the lava flows with the hatred and frustration as a response to oppression and threatens our comfort zone.

So the question is this: Is your or my community living near the volcano that is spewing the fire and lava of oppression, frustration or isolation that will one day erupt as it did in Ferguson? Most importantly, what will be the match that lights the next powder keg? The challenge is for us to go beyond dialogue and to assertively take on measures to be more inclusive and to commit to a system of shared accountability for our development as communities that can work together toward to becoming vested stakeholders in a common future. The option of not doing so is rather evident; it comes full-blown into our living rooms on CNN and on our smart phones. Wanton destruction only serves to pollinate the soil for the next harvest of hatred and racism. 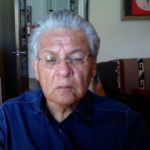 Baltazar Acevedo y Arispe, Jr., Ph.D. is a Chicano activist who spent 45 years at all levels of education. He left the University of Texas System in 2012 as a tenured professor of leadership and research. He resides in New Mexico and Waco, Texas.

(Visited 38 times, 1 visits today)
Posted in But some of us are brave..., Race & Ethnicity, Waco's Hispanic Community