“You’re a junior, Rachel?” asks Dale.
“Yep.”
“So you’d be about twenty. Know where I was when I was twenty?”
I take a stab, “College?”
“Vietnam. Then I went to Cornell. They say it’s a half-decent place, but I think they might just be saying that.”

That was my introduction to Dale Schirrmacher. The Gospel Cafe was the sort of place where, like Alice’s white rabbit, I believed as many as half a dozen impossible things before breakfast. There was a fellow named Virgil who swept in every weekday wearing a turban and a robe, and half of our regulars claimed he had parted Lake Waco the way Moses parted the Red Sea. If someone had come in and claimed to be Bobby Fisher, I would have reeled off the day’s pie offerings the same as I did for everyone. So when this particular Vietnam vet wearing a red cap and mangy assortment of t-shirts claimed to be an Ivy League grad, I dismissed the claim faster than I could return with the slice of banoffee pie.

Banoffee—a hearty can of dulce de leche nestled in a graham cracker crust topped with sliced bananas and whipped cream—was always in hot demand at the Gospel Cafe. When I extended the slice to Dale, he replied with, “Nah, it’s for you. I don’t eat that stuff.” I don’t know why I said okay and sat down. Maybe I had read Isaiah 58’s “extend your soul to the hungry.” Maybe I was tired that day or had a hankering for a post-lunch sugar coma. I suppose I couldn’t think of a good enough reason not to eat pie. So I sat down at the table. That exchange of pie and conversation marked the beginning of my unexpected friendship with a homeless diabetic in Waco.

There aren’t very many people who have read the entirety of my undergraduate thesis on Hopkins and poetry, but Dale did. He edited my paper on the suffering of Children in Dostoyevsky’s Crime and Punishment. Dale didn’t carry many papers around—his identity, disability, and Lone Star card—but I remember him pulling that dog-eared, marked copy of my paper in and out of the sleeve of his rain jacket, sheltering it from the elements like it meant the world.

The day I learned why Dale was on the streets was the day that he came into the cafe with clouded eyes, aggressive cheerfulness, and a liquor-shaped bottle in a brown bag cradled in a towel. Another volunteer, Bill, helped Dale into a chair, and I went through the lunch line for a plate of fried chicken, green beans, and a plate of salad with bleu cheese, wiping tears on the back of my shirt sleeve.

Bill saw my distress and responded to my query of “Why” with “Oh dear heart, that’s just how it is.” He explained how the first of the month—the arrival and subsequent exhaustion of benefits — lasts three days. For three days Dale and company would buy their own food, yank themselves up by their bootstraps. Following the inevitable brown-bagged incident, on the fourth day everyone would come back, and we would all have fried chicken.

I left the cafe for a few years—ventured to England for school, worked in Lubbock. By the time that the homing pigeon instincts landed me in Waco again, I found that I resisted the idea of going back to the cafe. I knew in my gut somehow that Dale was gone. One afternoon I walked back in. Nothing had changed and everything had changed. The kids who came to the cafe and ordered hot dogs now had their own kids.

Bill remembered me, and we caught up in between clearing tables and endless sweet tea refills. He told me about how last week they lost one of their own, a man named Dale who came in every day. They buried him in a city grave, no one at the cafe even knew about it. Bill says Dale was an oddity, he was the CEO of an oil company in Houston. One little drink turned into two little drinks, and before you knew it he was on the streets of Waco.

Bill wonders aloud how they identified Dale’s body. “He has a daughter, who teaches up at Cornell now, the same school he went to. Maybe they got a hold of her?” I figure the daughter’s about my age, an academic, a professor. I think about the disconnect between her and her father, and the disconnects that happen sometimes in the daily strangeness of knowing family members. I needed someone to read and mark my papers; perhaps Dale needed a conversation with a young over-eager academic.

Life rarely ushers in the most formative conversations in your life with fanfare. Instead, I find myself shaped by the seemingly happenstance conversations with unexpected characters. How do we process life—with its twists and turns, its heartbreak and its joys—with our neighbors? My friendship with Dale taught me that sharing pie, conversation, and ultimately sharing moments of our own brokenness, weaves a thread that binds a community of unpredictable characters together. 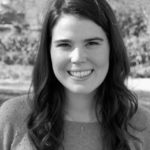 This Act Locally Waco blog post is by Rachel Wilkerson. Rachel works as a data analyst for the Texas Hunger Initiative and lectures at Baylor in mathematics and economics. A staunch advocate for pie as a catalyst for gathering folks together, Rachel thrives on impromptu poetry slams and conversations on front porches.