Speaking up for the “locked up and locked out”

These criminal records severely restrict the chance to work and find housing. Employers and landlords can lawfully discriminate against those with convictions simply by asking applicants to “check the box” if they have a criminal record. And even if an individual doesn’t check the box, criminal background checks are at the fingertips of most employers and landlords via the convenient access through the internet.

In regard to hiring, these rules may seem reasonable at first glance, but the result is to exclude a massive pool of able-bodied individuals from being productive members of society. This creates further separation and segregation and ultimately increases crime.[5] If one cannot provide for him/herself with food and shelter, crime will be inevitable. This is a direct relationship that cannot be ignored any longer!

If one has been marked with a criminal record, the domino effect of systemic separation begins. We know that 50% of marriages end, most often due to financial stressors.[6] If one cannot get a job, the institution of marriage is at a higher risk for failure, and families are severed because of lack of income. Child Support fines, fees and interest mount and compound. Without income, a father then must go to jail if he cannot pay his financial obligations. Eventually his driver’s license will be revoked, often a final blow to one’s ability to access the few jobs that are available to felons.

Finding a place to live is another serious challenge for formerly incarcerated individuals. After an individual’s time has been served, he is released back into society to reintegrate. A foundational part of reintegration is to find a place to live.  Landlords, however are legally allowed to discriminate on the basis of criminal record.  Even if a formerly incarcerated person finds a landlord who is willing to rent to him, the cost is often prohibitive. Most landlords have a “3 times rule”—an applicant must have three times the rent in income to qualify and be eligible to be a potential applicant. This is a high bar for formerly incarcerated people who often struggle to get even a minimum wage job. These barriers often result in homelessness, which can have a negative effect on mental and physical health, making it even more difficult to find a job and a place to live.   In other words, “the system” as it stands right now creates burdens on our community rather than alleviating them.

What can we do to change the system? I am not suggesting entitlement programs as a solution, I am suggesting equitable “in roads” and “on-ramps” or opportunities that allow one to get back on track and recover and develop from their past and present circumstance.

As an educated white male with a livable wage job, my own experiences cannot fully equip me to represent the experiences of marginalized populations. However, because of my vocation and more than a decade of working with the “disqualified”– those “locked up and locked out” of society — I feel “qualified” to advocate with and on behalf of those affected by systems of oppression.

What qualifies me even more than that is what Christ did by taking my place on the Cross, making me a kid of the King and giving me citizenship to the Kingdom of God. This makes me doubly responsible to speak for those who cannot speak for themselves.  I cannot be silent. I must not be afraid to speak up and speak out. 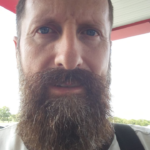 Jerrod Clark is a Texas transplant. He came to Waco in 1996 to attend school and never left. He is a graduate of Baylor University’s Diana R. Garland School of Social Work and is the Social Worker at the Meyer Center for Urban Ministries. He has been working with the homeless since 1998. He and his wife, Carolina of seven years have two daughters, Nichole and Hannah Jean. They are active participants at Church Under the Bridge.