In preparing for the Waco Walks “Slightly Spooky Halloween Walk” that will take place tonight, I took a closer look at the Starry Night mural on 10th street between Columbus and Washington. I wondered who came up with the idea and who created the beautiful mural.  I had enjoyed the murals on Elm Avenue, but this was one of the first ones I remember seeing on the “Downtown” side of the river.  A little Facebook sleuthing resulted in an answer. It was a project of one of Jenny Dougherty’s (now Jamison’s) art classes at Live Oak Classical School.  The building is owned by Thad & Loryn Hairston and their son Cullen Hairston was in Ms. Dougherty’s class in 2011.  I wrote to Jenny and she wrote me back.  I enjoyed her explanation so much, I thought I would share it with you all as a Halloween treat! – Ashley Bean Thornton 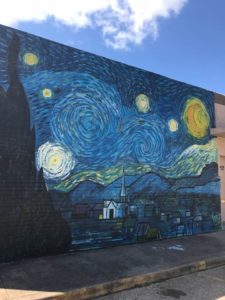 Gosh, I loved that project.

This was before Waco was “cool” (though it’s always been cool to me).  Before Fixer Upper etc. etc.  I had a dream of making downtown Waco more beautiful.

My 5th grade students study Van Gogh – It’s  a pretty powerful subject, conversations about mental illness, the value of art, etc.  I looked for a wall all Summer leading up to that school year.  Called countless business owners.  Finally a parent at Live Oak said he owned a building on 10th.  So we went for it.

I had loved Starry Night since I was a kid – I painted it on the bathroom walls of my childhood home.  It also lends itself to be painted by middle schoolers and is striking from a distance.

Sherwin WIlliams generously donated the paints.  It was much more of an endeavor than I realized.  Painting a mural is a bigger project than I’d done before.  Not to mention supervising middle schoolers in the wild :).

They did a fantastic job – I’m tearing up writing this.  They really did shine in their painting and responsibility around the whole project.  My then boyfriend (now husband) and I painted the top third, as we were the only ones who could reach it.  John and Kate Sterchi also helped quite a bit and had classes help.

I love seeing this mural pop up in the backgrounds of people’s engagement photos and touristy Waco things.  I hope you guys enjoy your walk!

This project serves as a reminder to me that … 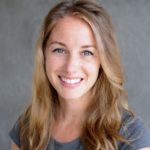 Jenny (Dougherty) Jamison was an Art Teacher at Live Oak Classical School from 2006-2012. She now lives in Austin with her husband Ryan and son Callaghan. She enjoys painting portraits, making bread and growing vegetables. Most days you can find her and Cal hiking the green belt or in the kitchen. Waco (and Live Oak) will always have a piece of her heart.