Let’s be civil…don’t make me uncomfortable

I’ve been thinking about anger and its place in our public discourse and how we communicate with our neighbors.

I’m no techie, which makes it difficult for me to understand everything about Russian “bots,” data analysis, and all the other digital interference that has been in the news since the last Presidential election. But I do understand that it was (and is) more than an effort to elect a certain person to office or to sway public opinion about a particular issue. The ultimate goal is to create instability and to sow chaos. To make us so angry at each other that we don’t trust the motives of our neighbor. And it has worked. We’ve all chosen our tribes and are yelling at each other across the expanse.

This is unsettling. Though I love an entertaining argument among friends, it is always with the assumption that, once it is over, both sides are able to lay down their swords and enjoy a drink of choice together.  There’s a point, however, where arguing seems counterproductive and dangerous. Though I fail at this often, there’s a point when I want us to talk to each other more calmly, rationally and respectfully.

I am also aware, however, of this: The last sentence I wrote in the previous paragraph is a product of my place in society. Calm, rational and respectful dialogue is the goal of those of us with privilege. For me, it is a privilege my whiteness, straightness and maleness to demand “calm, rational respect” occur during dialogue. It’s also a privilege for me to DEFINE what is meant by calm, rational and respectful. Demanding these things in conversation about big issues allows people like me to control the conversation and, more often than not, maintain the status quo.

So, there are these two things I hold in tension—The need to talk to each other more calmly and respectfully on one hand, and on the other, the realization that my wanting this is a result of my place in the world.

We have a lot of calls for calm dialogue in our country. At least once a week I see a news show convene a group of people with disparate opinions on a given topic to have a dialogue. It usually ends with an exhale by the moderator and a calm, sweet, “Now wasn’t that nice? No one got angry. You listened and spoke to each other with respect.” What we don’t often hear is a defense of anger and emotion. So I decided to ask some of my friends who are experts in being told to be more calm and rational—women—what they thought about these ideas ruminating in my mind. Their responses were instructive, and rather than giving commentary on what I learned, I wanted to share directly some of the things they had to say.

Respondent #1 (In addition to being female, also a Person of Color.): “…We want to trust our neighbors but that does require them to speak out and risk giving up some of their privilege and protection which is not easy to do…. I know that for myself and other friends of Color that we are not in place that we can filter or code switch* at all. Being polite and speaking reasonably is something we have done for so long that we end up taking ourselves completely out of those spaces and conversations to maintain our sanity, but also so that we don’t do irreparable damage to those people we care about while we wait for the conversation to shift.”

(*Note: “Code Switching” in this context refers to modifying behavior, tone, dialect, appearance, etc. in order to accommodate to the social norms of another — usually dominant — group.)

Respondent #2: “Anger as an emotion is a good thing. It’s an alarm bell that says you are being violated… The problem isn’t anger, the problem is injustice. Anger is the right of the oppressed, and blaming anger for our problems mislabels the problem. That being said, how we wield anger is important…. I am less and less convinced that civil discourse is the answer…at least, it cannot be the answer when “civil” discourse favors the privilege and the status quo, which it so often does. I’m not saying we ought to yell profanities and call names…I’m just saying anger is not the enemy here. You can be very angry and still say things that are true and constructive.

At this point I anticipate the pushback to these thoughts about anger, which often takes some form of this question: “Ok, I hear you. But what do you want me to do.”

Respondent #3: “People seem to want to circumvent the understanding part. ‘let’s just make the changes and be done with it.’ (i.e. I don’t want to feel anything, I want to be efficient with my time which means let’s get to a solution) Majority members don’t seem to have time to hear the pain or anger often.”

Respondent #4: Many times marginalized groups have tried polite civil discourse, and have not been listened to. Then, when they speak with frustration and anger, they are criticized. As a society we say, oh well I would listen to you if you weren’t so angry/emotional, when in truth many groups have tried that and gone unheard. Calling for civility has been a way that our society has attempted to quiet or sidestep uncomfortable conversations.  That being said, I do think civil discourse has its place especially if trying to reach beyond someone’s instinctual tribal reactions. Also speaking from privilege as a white female, speaking calmly and politely has helped me deescalate many situations, but it has also forced me to not ask for what I needed out of a situation for the sake of everyone getting along.

I think everyone would agree that we live in turbulent times. Maybe not any more turbulent than other times, but the stakes seem heightened. From national issues of gun violence, immigration and race relations, to local conversations about the fate of our schools and the location of our landfills, we are all bumping into each other’s worldviews and opinions in ways that can feel uncomfortable. What I have learned from these women is that this discomfort may be needed. Or, perhaps, the discomfort that certain groups have owned as a part of their inheritance needs to be shifted onto those of us for whom discomfort is foreign. 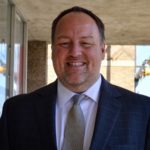