“What’s in a name?” Shakespeare asked.

We at City Center Waco would answer, “more than you might think.”

If you’ve strolled or cruised through Downtown Waco recently, you may have seen new banners on light poles. There are 37 of them, and they have one of the following four designations: Austin Avenue District, Silo District, River District and Elm Avenue District.  Each banner also says Downtown Waco, A Cultural District. 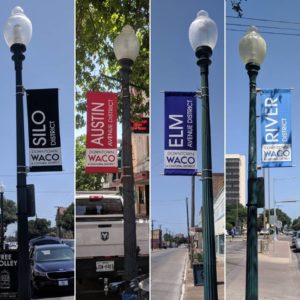 Sure, Downtown Waco has had banners before, showing support for United Way and Baylor University or encouraging people to explore the city. But the new banners have altogether different purposes, which we hope will serve Downtown well in this era of increased tourism. We envision this happening in a couple of ways.

First, we want the banners to serve as a beacon of sorts. Downtown Waco is very spread out with pockets of activity separated by stretches of nothing. If you are new to the area and see that there are more banners farther down the street, they may pull you in that direction, toward shops and eateries, etc., in a district you might not have explored had you not seen the banner in the distance.

Second, they identify districts. Once again, because Downtown Waco is so spread out, sectioning it off helps us be able to talk about what is where, better than if we were just lumping everything under the umbrella of Downtown Waco. Also, as downtown development continues, we will likely find these districts take on their own personalities, shaped by the businesses that call those areas home.

You see this in larger cities all the time. Take San Francisco, for instance: the Union Square area is known for chain stores, the Mission neighborhood is known for murals and Bayview is up and coming with a lot of warehouses and new restaurants. Waco is not San Francisco but the basic concept remains the same. Name a place and you can more easily direct someone to it. Also, as the area grows, there are opportunities for collective marketing as businesses come together to market the neighborhood.

The Public Improvement District, which is funded through a voluntary “tax” paid by property owners in the very core of Downtown Waco, has literally bought into the idea of promoting districts as a way to encourage people to explore more of Downtown.  The banners are only one of several ways the PID is identifying the districts.  You may remember colorful, artistic maps that evolved from temporary signs to an art-and-wayfinding system on utility boxes.  These early versions are giving way to the third generation of downtown district wayfinding: artist-designed steel kiosks.  The unique district kiosks grew from the PID’s original concept to include a hand-drawn map and solar lights thanks to the championship and financial support of the CVB and Creative Waco.  Next to come will be building lights that carry the banners’ colors for each district into the evening hours and beyond.

Don’t miss the larger picture, though.  By creating these visual connections between locations in a district, drawing the eye to districts a few blocks away during both day and night, and providing maps that give greater context to Downtown Waco as a whole, the PID and its partners are doing more than just promoting the districts themselves.  They make all of Downtown Waco more attractive, as adventurous visitors join locals in braving those “between” places, venturing on foot along pathways that were previously untraveled.  The blossoming of areas along Mary and Jackson is in some ways the early fruits of activating more and more of downtown.  Perhaps the districts will have most fully done their job when they are no longer separated by inactive space and Downtown Waco feels full, active and connected.

City Center Waco (acting as staff to the Public Improvement District) invites you to an open meeting on Wednesday, August 15 from 4:00 PM-6:00 PM at City Center Waco, 801 Elm Avenue. The purpose of the meeting will be to gauge interest on the part of property owners within the Public Improvement District to participate in the second phase of the Downtown Lighting Project. Facebook event: https://www.facebook.com/events/516276048811067/ 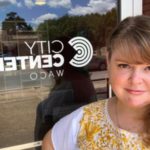 Wendy Gragg, Director of Communications for City Center Waco. City Center Waco helps drive development in the CITY CENTER, made up of Downtown Waco and the surrounding neighborhoods.