As you may have heard, the US Census Bureau recently released the 2017 American Community Survey (ACS) data. The ACS is an ongoing survey of individuals and households. The government uses this information to help distribute federal and state funds each year, and the Prosper Waco backbone organization uses this data to track our community’s progress toward the initiative goals. The ACS includes information about population demographics, employment, income, educational attainment, housing and other topics. It is important to note that while the newly released ACS data breaks down 2017 outcomes, it is the most available and recent data for our community to use in guiding the work of Prosper Waco. Click here to peruse the American Community Survey data portal.

Across all indicators, Waco saw notable improvements from 2016 to 2017. Waco’s growth mirrored the growth that was seen at both the state and national levels. Below is a breakdown of key indicators of how our community is doing:

In 2017, the number of individuals experiencing poverty was concentrated within the City of Waco. The number of children (individuals under the age of 18) living in poverty in Waco increased, while all the other categories decreased. 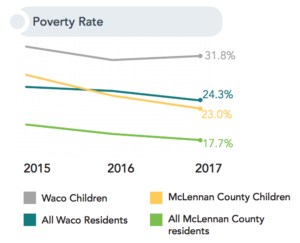 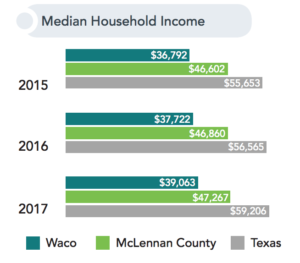 In 2017, one in six youth who looked for work were unable to find employment. Waco had slightly higher unemployment rates compared to the county and state. 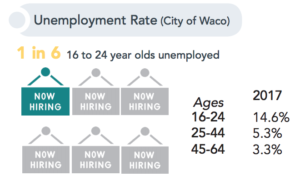 Eighty-five percent of Wacoans were insured in 2017, which was higher than the state average. Additionally, the highest population at local, state and national levels without health insurance were 26-34 year olds. 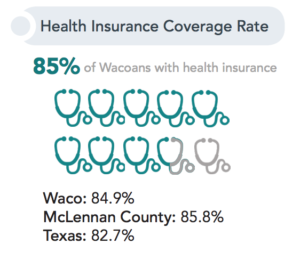 Our community is using data, like what is highlighted above, to make data-informed decisions and to work toward advancing the goals of the Prosper Waco initiative. To learn more about these partnerships and initiatives, visit “The Work” page on the Prosper Waco website. 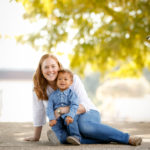 Christina Helmick is the director of communication at Prosper Waco. She is a recent graduate of Baylor University with a BA in Journalism, Public Relations & New Media. Originally she is from Washington, D.C., but has stayed in Waco post-graduation.  She is an active mentor at J.H. Hines Elementary School, enjoys spending time with her family and watching Baylor football. Sic ’em Bears!