Waco-McLennan County Public Health District, Creative Waco, and City of Waco Parks and Recreation collaborated to create the Sidewalk Chart Art Obstacle Course Challenge. The Challenge was a community-wide project that tasked families to get outside and get creative by drawing their best sidewalk chalk obstacle course.

The Health District received multiple submissions from the community, all containing different, creative ways to get through the obstacle course such as: hopping like a bunny rabbit, spinning, doing your best touchdown dance, and jumping through lily pads like a frog.

“The goal for the challenge was to provide families with a fun way to get outside and get active, while also providing a COVID-safe activity for all to enjoy,” said Emily Green, public health education specialist for the Public Health District.

Families were asked to submit photos March 23-April 18, and winners were chosen May 3. A panel of judges representing local organizations scored the entries on creativity, obstacles within the course, and the ability for all community members to enjoy.

The winners are the Vaughn and Peebles families, the Sharma family, and the Striezel family.

The obstacle courses are now painted on sidewalks near the playground stations at Bledsoe-Miller Park (300 N. M.L.K. Jr. Blvd.), South Waco Park (2815 Speight Ave.), and Dewey Park (925 N. 9th St.). Tashita Bibles, a talented local artist, stayed true to the spirit of the kids’ original artwork, while bringing some magic of her own.

“How cool that some of the children who participated get to see their artwork come to life in City of Waco parks. It’s a reminder that everyone’s ideas can make a positive difference in our community” said Fiona Bond, executive director of Creative Waco.

Waco is walking this fall; time to sign up

Did you know that walking is one of the easiest, least expensive, most accessible ways to improve your health?

It’s not complicated. There’s no pressure. No elaborate or pricey equipment or memberships are necessary. You control your schedule, your distance, where you go, and who you go with. Just put one foot in front of the other and join “Let’s Walk Waco” this fall.

You can create a team of your friends, neighbors, family, or co-workers or join a team and get the chance to meet and make new connections. Anyone can join, and McLennan County residents who log their miles may win prizes along the way.

For information on how to register, create, or join a team, visit our website. There you will also find information about community center parks and indoor walking opportunities, City parks and trails, frequently asked questions, and other helpful tips and resources. Come join the fun and “Let’s Walk Waco.”

Susan Menninger Krause is manager of parks and rec facilities and programs for the City of Waco Parks and Recreation. Susan formerly was branch executive director at Waco Family YMCA. Before coming to Waco, she worked 16 years at Greater Joliet Area YMCA near Chicago. Susan holds a bachelor’s degree in English from the University of Texas at Dallas and a master’s degree in kinesiology from the University of North Texas. She and her husband, Ken, have two sons, Zachary and Tyler, both are in college.

Act Locally Waco also has an informal group of walkers called Waco Walks. There is more information on our Waco Walks web page.

Crisis often leads to chaos, but hope is possible

There is no avoiding a crisis; chaos can come in all sizes. Everyday good people are faced with unimaginable bad luck, disasters, break downs, unexplainable confusion, desperation and violence. But none of these should be the last word on anyone’s life.

The worst thing that happens to you should not define you. But all too often, a crisis and the chaos it brings, changes everything and every relationship in sight. What if every crisis ended up on your doorstep?

Waco needs a crisis hub. A crisis hub is a place that is a combined resource center that can help streamline decisions, bolster support, provide a smooth hand off, and share the load to help people in crisis avoid the chaos that can destroy themselves and their families.

Right now, mental health professionals, medical personnel, City of Waco, and McLennan County leaders are working toward building the right team to respond to overwhelming crises and build a place for Waco to have a crisis hub. Responding to the kinds of personal crises that can bring harm to self and others and finding the way out of chaos takes a team.

Through the leadership of the Prosper Waco working group, the Behavioral Health Leadership Team, the Board of MHMR, and the advice of other communities who have also tackled this problem, Waco is retooling to minimize the chaos that wreaks havoc on friends, family, and neighbors. Bringing existing resources together matters, and it multiplies the effectiveness of intervention.

The number of people in crisis and the intensity of the crises grow month by month. One frustrated man in crisis described Waco as a pinball machine – “I know I need help, but all I can do is bounce around town or be drunk or violent. Can’t somebody catch me on the bounce. I know I need help?”

Teams in a crisis hub can function together to avoid duplication of efforts; they can minimize missed opportunities and promote persistence; they can support each other in the very hard work of helping people climb out of chaos and find hope. A crisis hub team can find steps toward solutions JUST because they are together and can bring many talents to bear all at once. Concentrating services helps the person in crisis and it helps sustain the strength of the professionals working together, too.

When is the sum greater than its parts? When a small group of caring, talented people step in together to tackle chaos and come out the other side with hope. I would not know what to do if the crisis were on my doorstep, but I can be part of the solution by supporting the team that is building the Waco Crisis Hub.

In honor of Black History Month, we are featuring interviews with local Black community leaders. These pieces were written by Baylor University students from the Department of Journalism, Public Relations, and New Media. The students asked questions about what the leaders love about Waco, and we are excited to share their responses with you this month.

At the heart of what Galen Price, Waco interim assistant city manager, does every day is listening to the people of Waco. He listens to citizens and to business owners, to praises and to complaints. This listening then shapes his priorities.

Price sees his role as serving the needs of the community. Because of this, he views it as very important that citizens speak up about their needs. Listening to the community allows him and his team to enforce the policies that are working well and to know where the city is falling short.

“Just being involved so you can hear what’s going on, that gives you an opportunity to have a voice in what’s being considered and provide feedback on how it’s being viewed by you as a citizen in a community,” Price says.

According to Price, there are numerous ways for citizens of Waco to make their voices heard. He suggests that residents attend city council meetings, which are currently held online due to the pandemic. Price also suggests citizens attend neighborhood association meetings or start their own association if their neighborhood doesn’t have one.

Price became interim assistant city manager in August, after Deidra Emerson, who previously held that role, was promoted to deputy city manager, according to a 2019 article in the Waco Tribune-Herald. “It was an opportunity that you dream of and just couldn’t pass up,” Price said.

Price has spent 21 years in municipal government work, since he graduated from the University of North Texas in Fort Worth.  He has been in Waco since 2017. Before coming to Waco, he worked on  housing projects in Irving. Previous to becoming interim city manager, Price worked as the city’s director of housing and community development. While in this position, he worked with Waco’s Family Abuse Center and Mission Waco, a Christian organization that addresses systemic issues with poverty.

Price says Waco is making significant investments into its infrastructure, economy, and housing. He says that even before home designers Chip and Joanna Gaines brought Waco into the national spotlight, good things were going on in the city.

“I can one day envision Waco being one of the places that’s considered one of the best places to live in the nation,” Price says.

Price said he loves Waco because although it is developing, it still has a small-town feel. That feel is something that differs from his large hometown of Fort Worth.

“Relocating here from the metroplex, I enjoy the camaraderie and the way people make you feel at home here,” Price says. “As we continue to grow, let’s do our best to try to keep that feel.”

The mission of the Heart of Texas P-20 Council is to assist with the collaboration of education, business, and community to maximize the utilization of resources, programs and services for all students while encouraging a culture of life-long learning. We envision that all students can reach their true potential as happy, healthy, productive and self-sufficient citizens.  One local event that helps with this mission is S.T.E.A.M. Day.

The City of Waco, along with ESC Region 12, is hosting its annual S.T.E.A.M. Day on October 11.  Geared towards middle and high school students in the Central Texas area, this event helps students explore the fields of science, technology, engineering, architecture, arts and mathematics (S.T.E.A.M.).  Participating students will be able to speak directly with professionals about career choices in various fields.  S.T.E.A.M. Day is a free, come-and-go exhibition for schools and at the Waco Convention Center. The attendance has continued to grow over the past several years.  Last year over 2,200 students from 40 schools registered for the event, along with 86 exhibitors from various career fields.  Our exhibitor roster included local manufacturing companies, higher education establishments, engineering and architecture firms, and also high school robotics teams.  This event is free to exhibitors as well.

This is an awesome event for students to get a hands-on opportunity to see future careers in action. This event has morphed over the years from “Engineering Day” to “STEM Day” and now “STEAM” Day.  This event is held annually in October to inspire students to pursue careers in the community in science, technology, engineering, architecture, art and mathematics. This event is hosted by the City of Waco Public Works Department. This year’s event will be held on Tuesday, October 11, 2017 at the Waco Convention Center from 8 a.m. to 2 p.m. 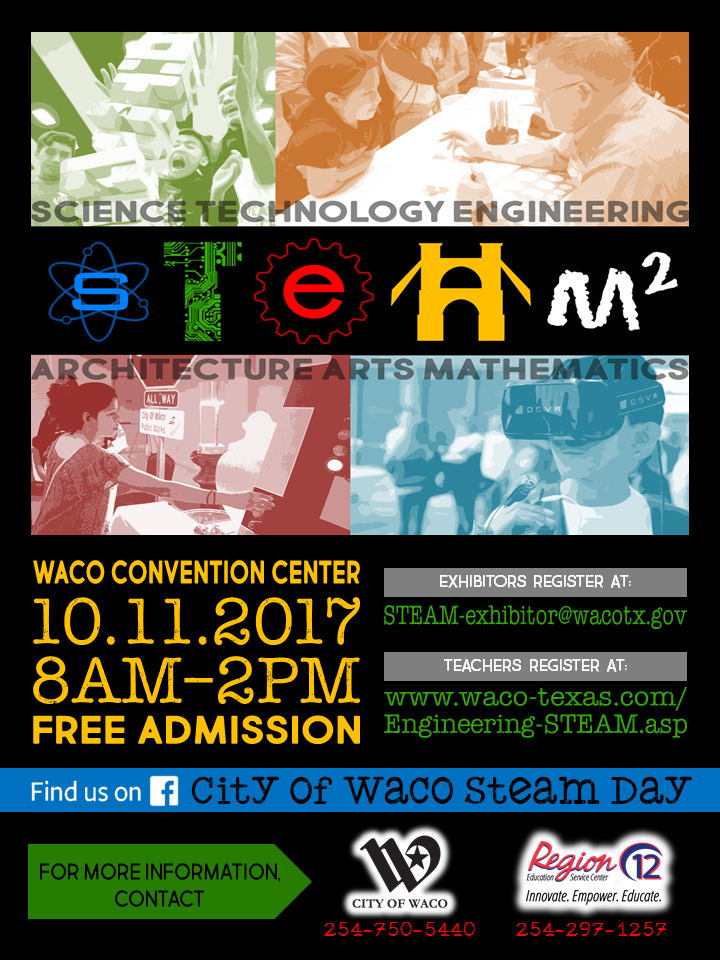 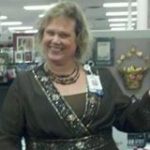 This Act Locally Waco blog post was written by Christine Holecek. Christine is an Education Specialist at Education Service Center Region 12 in Waco. She has worked in the area of Adult Education and Career & Technical Education for the past 25 years. She earned an AAS degree from MCC, a BAAS and Master’s Degree from the University of North Texas and is currently enrolled in the Doctoral Program in Educational Leadership and Policy Studies at Tarleton State University.